The earth dragons (Japanese: 地竜 earth dragon) are one of the dragon tribes of Archanea. Once said to be the mightiest of the dragon tribes, rivalled only by the divine dragons, their pride was their downfall in that it ultimately resulted in their virtual extinction, with all but one of the tribe sealed in the Dragon's Table by the Binding Shield. The sole escapee, Medeus, went on to eventually become an infamous tyrant and the founder of the Dolhr Empire, and the other member of the tribe went beyond even beyond death to cause chaos and tyranny in another land and time. 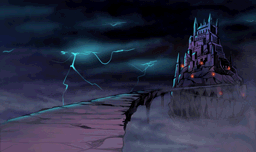 The Dragon's Table, the tomb of almost all earth dragons.

Millennia before the foundation of the Kingdom of Archanea, the dragons were the dominant race of the land, presiding over an enlightened and advanced civilization covering the entire continent; this changed one thousand years before Archanea's formation, as the dragons began to show signs of deterioration. When the divine dragon elders recommended that dragons seal their power into dragonstones and take a human form to ensure their survival, the earth dragons refused out of sheer pride, with the sole exception of their prince, Medeus. Within three centuries, much as the elders had predicted, the earth dragons had indeed degenerated into mindless wild monsters and begun attacking the fledgling human race. In response, the divine dragons, led by Naga, engaged the earth dragons in a war, fighting to protect mankind. During the conflict, a bishop from a distant land, Gair, arrived in Archanea and approached one of the Earth Dragons, Loptous; the two formed a blood pact, and Loptous was confined to the form of a powerful dark tome usable only by Gair and his eventual descendants, whom he would possess through the tome.

In the end, Naga's tribe defeated the Earth Dragons, though with their own tribe nearly wiped out. Naga created the Dragon's Table in what would later become Macedon, and sealed the defeated earth dragons within it using the Binding Shield forged from his own fang; according to Gotoh, some several thousand earth dragons were sealed within the Table, having presumably died in the war and reawakened in the years since.[1] He then tasked Medeus, the sole survivor and Manakete of the Earth Dragons, with guarding the altar and its seal. 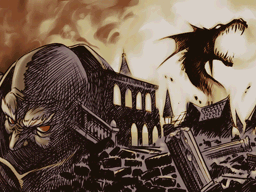 Seven hundred years later, the seal on the Dragon's Table was weakened when the thief Adrah broke the orbs off of the Binding Shield, although the effects of this would not become apparent for several more centuries.[2] The broken Shield, renamed the Fire Emblem, became the crest of the kingdom Adrah soon formed, the Holy Kingdom of Archanea. Meanwhile, Medeus spent the centuries observing the rise of mankind and the increasingly derogatory treatment they inflicted upon the impoverished and weakened manaketes of the world. His observations ultimately led to his foundation of the Dolhr Empire in protest of this treatment, and his subsequent conquest of the human world which lasted for five years. His rule was brought to an end in what became known as the War of Liberation, when Caldas's uprising destabilized Dolhr's hold on the world and when Anri, wielding Falchion, killed Medeus in single combat.

A century later, Medeus was subsequently revived twice by the sorcerer Gharnef and sought to resume Dolhr's dominion over the world, but in both instances he was slain by Anri's descendant Marth, again using Falchion. Perhaps more importantly, the weakened seal on the Dragon's Table had sustained six hundred years' worth of degradation by this point, to the point that the captive earth dragons were beginning to stir and emerge to serve Medeus around the time of the War of Heroes and his second resurrection. Indeed, a single wild earth dragon was present in the Archanean palace, Millennium Court, under Emperor Hardin's command during his showdown with Marth. Marth, meanwhile, had been tasked by Gotoh with gathering all five spheres and restoring the Binding Shield to its true state, in which he succeeded following his defeat of Hardin. Medeus himself had evolved into a Shadow Dragon in his second resurrection, and when Marth came to challenge Medeus, earth dragons constantly emerged from the depths of the Table to serve Medeus, only to be killed by Marth's army or repelled and re-sealed by the Binding Shield. After Medeus's fall, the seal was restored and those Earth Dragons which survived the fight were returned to their imprisoned slumber.[3]

A millennium later came the rise of the Fell Dragon Grima and his conquest of the world, until again he was defeated through the use of Falchion and the Binding Shield. Grima is alleged to be "descended from" earth dragons, although his exact relation to them, and whether or not he is a true earth dragon himself, is unknown considering the extreme differences in biology and power he exhibits.[4] 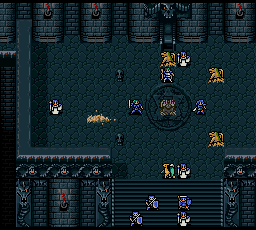 An earth dragon burrowing through the ground in Mystery of the Emblem.

Earth dragons have had consistently different appearances from each other—the original, dinosaur-like Shadow Dragon & the Blade of Light and Mystery of the Emblem design shared by Medeus and the other earth dragons in the latter differs wildly from Loptous's serpentine form, which again differs from the quadrupedal redesign of Medeus and other Archanean earth dragons in the Nintendo DS remakes. However, all three of these designs share the common trait of either completely lacking wings or only having small ones, reflecting their affinity with the earth. In all portrayals, earth dragons have mottled dust-brown hide and have a more muscular build than ice dragons or mage dragons.

Although earth dragons do have a natural affinity for the earth, and while in Mystery of the Emblem they are seen to move around by burrowing through the earth and Medeus begins his battle in both Mystery Book 1 and Shadow Dragon & the Blade of Light by emerging from the ground, their powers do not appear to be solely earth-based. They appear to command sinister powers associated with darkness, best evidenced through their breath weapon being Dark Breath. Similarly, although this has happened only once, earth dragons revived under certain circumstances will take a more clearly darkness-oriented form and become Shadow Dragons.[5] The sinister power of earth dragons vastly exceeds the power of all other dragon clans save for the divine dragons, and typically the power of a divine dragon, whether an actual divine dragon or a weapon imbued with their power, is needed to successfully combat earth dragons.[6]

Earth dragons innately possess exceptionally high life force, and as a result of it they are unable to be completely destroyed; the state of a deceased earth dragon is better described as being a state of sleep, and they will typically reawaken of their own accord after a period of centuries. The reawakening of an earth dragon can be hastened through the use of human sacrifice, particularly sacfices of pure-hearted women.[5] Similarly, they often exhibit protective abilities which at least partially shield them (or those wielding their power) from harm, making them even tougher to kill in the first place.

Earth Dragons possess formidable offensive and defensive power, inflicting physical damage with their Dark Breath. Their prowess is further augmented through certain traits they exhibit in certain games: Shadow Dragon & the Blade of Light has the Earthstone grant its users invulnerability to ranged attacks, forcing the player to confront Medeus at close quarters, while Mystery of the Emblem gives Earth Dragons the ability to only take half damage from all incoming attacks. However, Earth Dragons can be undermined through exploiting their type weakness: in all three games where it exists as an autonomous class, the Divinestone/Breath of Fog and Falchion inflict bonus damage on Earth Dragons, although Wyrmslayers and Dragonpikes do not.

In Shadow Dragon and New Mystery of the Emblem, the Earth Dragon is classified as a special class, and accordingly has a higher level cap of 30.

The stats for Shadow Dragon are used to calculate the stats of a Manakete using a Earthstone in combat.

The stats for Shadow Dragon are used to calculate the stats of a Manakete using a Earthstone in combat.