For the white magic spell from Gaiden and its remake known as Illusion in Japanese, see Invoke. 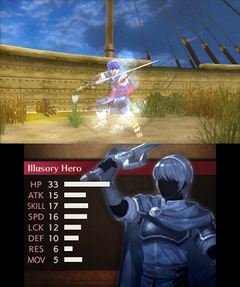 An Illusion taking the form of the Hero-King Marth

Illusions (Japanese: シャドー Shadow in Gaiden; 幻影兵 Illusory Soldier in Echoes: Shadows of Valentia) are spirits of fighters that can be summoned by users to act as allies when fighting.

In Fire Emblem Gaiden and Fire Emblem Echoes: Shadows of Valentia, Illusions appear to have the same characteristics as Specters from the same game, with the only difference being is that Illusions are allies, while Specters are hostile towards the player. However it is revealed when using an amiibo to summon an Illusion to have dark skin with no faces, with the clothing having a blue tint and glow to it.

Illusions in Fire Emblem Fates, on the other hand, appear to have the same characteristics as any human, and are able to speak just as well as humans. This is likely done to not confuse Illusions with Vallite soldiers, spirits that bear more of a resemblance to the Illusions from Gaiden and its remake.

Illusions from Gaiden can only be summoned by users with the Invoke spell - one spell summoning a maximum of 8 Illusions - and will move by themselves at the beginning of the player phase. The class of the Illusion is fixed to a certain character, for example Genny's Illusions will always be soldiers. This concept was kept in Echoes: Shadows of Valentia, with the exception of the Illusions moving during the ally phase, instead of at the beginning of the player phase. Alm and Celica are also able to use Mila's Turnwheel to summon Illusions for a single turn using an amiibo, at the cost of 10 HP. Unlike the Invoke spell, they can only summon one Illusion per turn, even if both Alm and Celica are present, and the class with remain fixed to the amiibo, instead of the unit summoning the Illusions.