Silesse (Japanese: シレジア Silesia) is one of the nations of Jugdral, located in the continent's furthest northern reaches. Mostly sea-bound, it is connected to both the Aed Desert and Isaach to the east by a relatively thin strip of land. Founded by Ced of the Twelve Crusaders, it is famous for being the native nation of Pegasus Knights in Jugdral, and for its Wind Mages. The people of Silesse worship Forseti, the dragon who made a blood pact with Ced at the Miracle of Dahna, whom they call the Wind God. 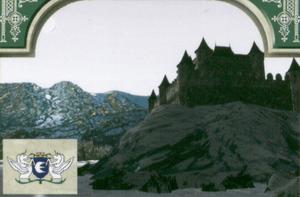 Silesse as depicted in the Fire Emblem Trading Card Game.

A neutral nation for much of its history owing to its rough terrain and the strength of its Pegasus Knights, Silesse came to experience internal strife after the death of one of its kings. By the year Grann 759, the younger brothers of the late king, Daccar and Myos, had grown disgruntled with the favored heir to the throne being the king's son, Lewyn, and so sought to incite a civil war and seize Silesse for themselves. Meanwhile, Queen Lahna was hosting the fugitive Sigurd of Chalphy and his army following their escape from Agustria, provoking the threat of invasion from the Grannvale forces pursuing him. In response, Sigurd first subjugated Daccar's uprising before leaving Silesse to confront Grannvale, not wishing the innocent nation to be attacked without reason.

Following the Battle of Belhalla, Silesse was conquered by the newly-minted Grannvale Empire, and remained subjugated as part of its territorial holdings for the next seventeen years. During this time, the reigning queen Erinys tried to help the nation as much as she could, but died of illness. At the peak of Seliph's liberation war in Grann 777, though Seliph never fought there personally, the people of Silesse rose up in rebellion inspired by Seliph's example and destabilised Grannvale's hold on the nation.[1] Following the defeat of Grannvale, the throne was ascended by Prince Ced, Lewyn's son.

The nation's central castle and the ruling seat of power. It was assaulted by Duke Daccar's army in his bid for rule of Silesse.

The westernmost castle in Silesse. Queen Lahna loaned it to Sigurd and his army as a place to live during his exile in Silesse.

The castle ruled by Duke Daccar.

The castle ruled by Duke Myos, and the northernmost settlement in both Silesse and Jugdral as a whole.

The easternmost castle of Silesse. It was seized by Lombard in his pursit of Sigurd.

Silesse is the subject of Chapter 4 of Fire Emblem: Genealogy of the Holy War. The player's army starts from Sailane, the home castle for the chapter, and the goal is to defeat Daccar and Myos and seize their castles, Tófa and Zaxon. Zaxon also serves as the home castle of Chapter 5, with Lubeck Castle (controlled by Lombard) being the first seize goal for the chapter.