Wyverns (Japanese: 飛竜 wyvern) are one of the dragon subspecies of Archanea and other continents in the Fire Emblem series. Wild wyverns are frequently tamed by humans and ridden as steeds for battle, comprising the Wyvern Rider class and its advanced forms.

As with the other dragon tribes, the wyverns were once part of the flourishing dragon civilization in the antiquity of Archanea. This changed one thousand years before Archanea's formation, as the dragons began to show signs of deterioration. When the Divine Dragon elders recommended that dragons seal their power into dragonstones and take a human form to ensure their survival, it is uncertain whether any wyverns co-operated as no wyvern manaketes have ever been seen; either way, a large number of wyverns refused to shed their dragon lives and eventually degenerated into wild beasts. The wild wyverns lived primarily in the Mamorthod Desert, the Wyvern's Dale, and in the forests of what would later become Macedon.

Humans first adopted the art of riding wyverns as mounts during Medeus's first reign of terror upon the land, in the War of Liberation in the year 493. In the Macedon region, a revolution arose among the abused slaves to the Dolhr Empire, spearheaded by the hero Iote. Iote and his companions were the first to tame the wild wyverns for use as steeds, and with them fought back against Medeus's occupation to free the slaves. Following the defeat of Medeus by Anri, Iote founded the Kingdom of Macedon, which rapidly gained fame as the home of the dracoknights, renowned and fearsome warriors who continued to tame wyverns for use as their mounts.[1]

In other continents and worlds, wild wyvern populations are typically found only in one country on the continent, and in a similar vein to Macedon that country's military tends to be famous for its wyvern riding knights. These countries are: 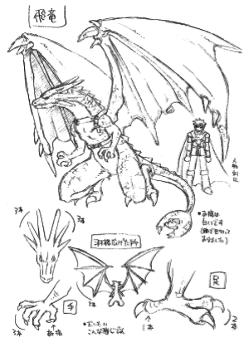 Concept artwork of a Wyvern from The Binding Blade.

Wyverns are significantly smaller and more agile than other dragon clans, and are characterized primarily by their affinity for quick flight. Wild wyverns and wyvern-transformed manaketes breathe fire like the fire dragons, but tamed wyvern mounts appear to never use this ability, with the exception of the Savage Blow skill of Malig Knights. Some tamed wyverns, such as Cherche's wyvern Minerva, exhibit relatively high intelligence and are capable of comprehending human speech to some degree.[3] However, this ability seems to be as much a result of the skill of the rider in communicating thoughts and emotions without using words as anything else,[4] and is compared to the ability of some people to communicate with their pets.[5]

Their general appearance and number of limbs varies between different games in the series. Traditionally in European cultures, a wyvern is defined as being more serpentine in their general shape and possessing only two legs, as opposed to the four legs of traditional European dragons. In this respect, the majority of Fire Emblem depictions of wyvern mounts differ significantly from their mythological origin: some have four legs and almost all look more like a lizard or traditional dragon in their body shape. Indeed, the best visual match for the traditional wyverns offered by these classes is the Wyvern Knight of Fire Emblem: The Sacred Stones, whose distinct serpentine appearance differs greatly from the other wyvern classes in the game.

The number of legs shown on wyvern mounts in each game are as follows:

In the Japanese version of the Fire Emblem series, the classes which are referred to in English as riding wyverns are usually referred to as "Dragon Knights", specifying dragons rather than wyverns; the English versions of Radiant Dawn and Shadow Dragon do this as well. However, the dragon name primarily acts as a title for the class in these cases, and in dialogue these tamed wyvern mounts are still explicitly referred to as "wyverns" in the Japanese version, spelled the same way as the wild wyverns of Mystery of the Emblem.[6] It is thus a safe assumption that no matter how varied the appearances of these mounts are, they are indeed meant to be the same species as the wild wyverns.

Notably, the battle sprites used for wyverns in Mystery of the Emblem are identical to the the wyvern mount in the Dracoknight class's battle sprites. The Nintendo DS remakes did not retain this similarity, probably because of an oversight caused by them being designed in two different games from each other.

Nine classes have used wyverns as mounts throughout the Fire Emblem series.

Wyverns exist as an individual class only in Fire Emblem: Mystery of the Emblem and its remake, New Mystery of the Emblem. Wyverns attack with Fire Breath, are the only dragon class to act as an actual flying class with immunity to terrain penalties, and also possess a large movement range. The games' playable Manaketes can transform into wyverns using the rare wyvernstone items, exclusively available from secret shops, although only Tiki can use them in the original Mystery.

In Mystery, the main advantage to the Wyvern transformation was the movement bonus, but in the remake dragonstones function purely as weapons and do not allow the user to stay in that state, removing the movement benefits that were there initially.

The stats for New Mystery of the Emblem are used to calculate the stats of a Manakete using a Wyvernstone in combat.

The stats for New Mystery of the Emblem are used to calculate the stats of a Manakete using a Wyvernstone in combat.