The Ravens (Japanese: カラス Crow) are a laguz clan of Tellius and one of the bird tribes, along with the herons and the hawks. They came from Kilvas, ruled by the Raven King Naesala.

Raven laguz are also known as crows in dialogue of Fire Emblem: Path of Radiance. 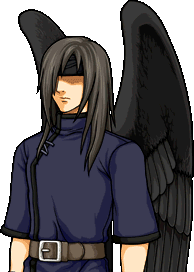 A generic male raven in humanoid state, exhibiting the typical features of one of the raven clan.

Like the rest of the bird tribe, ravens retain their wings when in humanoid state and possess pointed ears. When transformed they are far larger than typical non-laguz ravens; they can also be identified as laguz in beast form by the markings, typically on the breast and forehead, across their feathers.

Those of the raven clan have jet-black plumage and none are known to deviate heavily from this coloration, though the elderly raven Nealuchi's plumage appears to be graying in old age.