Not to be confused with Red Dragoon, a chapter from Archanea Saga.

The Red Dragon (Japanese: 赤竜 Red Dragon) class is a laguz class belonging to the red dragon laguz from Goldoa in Fire Emblem: Path of Radiance and Fire Emblem: Radiant Dawn. The two playable red dragons are Ena and Gareth. They attack with Breath, but they can only use this if they are in laguz form. They have the skills Shove and Ire. 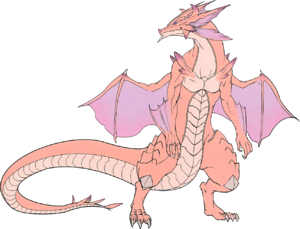 Ena, a red dragon with a white dragon grandfather.

Like the rest of the dragon castes a red dragon's humanoid form features none of the typical laguz traits, wings, feline/canine ears, or tails, though they do have an orange or bronze hue of the skin. Their human form's skin color is generally the only hint that they are dragons, though they can pass for beorc regardless.

Red dragons in dragon form are of a fairly large size, though they are dwarfed by black dragons. Most red dragons, as their name indicates, are red. There is one known exception, Ena. Her scales are of a much pinker hue, though she is not a fullblooded red dragon, having a white dragon relative, her grandfather Nasir.

Red dragons, in contrast to their white counterparts, excel in strength and physical bulk.

Red dragons age similarly to the other dragon castes, being very long-lived, and capable of living past one-thousand years.