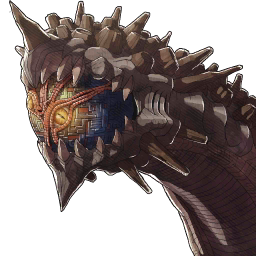 The First Dragons (Japanese: 神祖竜 Divine Ancestral Dragons), are a type of dragon with godlike power. Historically, at least twelve First Dragons are known to have existed.[1] During the events of Fates, the only two known remaining full-blooded First Dragons are Anankos, who is severely degenerated, and the Rainbow Sage, who is undergoing the first stages of degeneration. Both characters are deceased by Fire Emblem Fates' conclusion.

Some of the history of the First Dragons is recited in the Ancient Texts in the Records Hall.

These texts mention a war between fellow dragons, with some of these dragons using humans as pawns for furthering their goals. These dragons blood bonded with their chosen humans and granted them incredible power.[2] The motives behind this war are unknown, and eventually the First Dragons themselves faded to death or madness[3] while their blood bonded descendants persevered.

Before the disappearances of the First Dragons, two known as the Dawn Dragon (Japanese: 光竜 Light Dragon) and the Dusk Dragon (Japanese: 闇竜 Dark Dragon) went on to found and bless the nations of Hoshido and Nohr respectively.[4][5] One of the remaining First Dragons, Anankos, remained in Valla for a time, presumably ignoring his own degeneration to stay with the Humans of that land. As Anankos had predicted, he ended up wiping out the majority of the Vallite population after falling to madness.

Shortly before the events of Fates a "fragment" of Anankos seeks help from a country in another world. He summons three warriors, Severa, Inigo and Owain, in the hopes that these three will set his child on the right path to stopping his degenerated self.

There are two known living, full-blooded First Dragons that exist during the events of Fates: Anankos and the Rainbow Sage. Anankos takes the role as the primary antagonist due to his degeneration, while the Rainbow Sage takes a passive role in giving Corrin some advice and power shortly before dying.

During the events of the Birthright and Conquest campaigns, the existence and identity of Anankos is unknown due to the curse he placed on Valla at an unknown time in the past.

In the Revelation campaign Azura is finally able to explain who the true enemy is to Corrin, and Corrin gathers the combined strength of Hoshido and Nohr and kills Anankos for good.

Some specifics of the First Dragons are left somewhat vague in Fire Emblem Fates. Anankos, a first dragon, has the class Silent Dragon, it is unknown if this form is a result of his degeneration or if the First Dragons took a variety of forms and elements when they were prosperous. There is also Garon, who is an Empty Vessel made by Anankos and apparently First Dragon blood, who takes the form of a "Blight Dragon". The Rainbow Sage only ever appears in his human guise.

First Dragons appear to be able to take human form in a similar fashion as Manaketes, though unlike Archanean Manaketes, this did not seem prevent their degeneration. In Corrin's case, using a Dragonstone quelled their dragon form's madness, it is unknown why this was effective in keeping Corrin's sanity, though it is possibly due to them being half-blooded. It seems the only true way for the full-blooded First Dragons to escape degeneration is death. Like Manaketes they are able to blood bond and reproduce with Humans with no issue.

Assuming Anankos' power is typical of First Dragons, the First Dragons demonstrated a wide array and magnitude of powers. The fragment of Anankos that requests the help of Severa, Inigo and Owain offers them gifts like longevity, power, and an enduring bloodline. Anankos is also capable of restoring the lands of the future that Grima destroyed, and is able to open portals between worlds. The Rainbow Sage also demonstrates the ability to bestow strength to others during the events of Fates.

Notably, Anankos is explicitly unable to fully revive the dead. He is, however, capable of bending deceased spirits to his will and using them as soldiers for his assaults on Hoshido and Nohr.