Wolves (Japanese: Wolf) are a tribe of beast Laguz, and class, appearing in Fire Emblem: Radiant Dawn. They were believed by the majority of Tellius to have been extinct until recently. Wolves, as evident by their name, take the form of wolves in combat. Wolf laguz are currently only known to be from Hatari.

Around the year 645 Nailah came up with a plan to move Hatari's inhabitants (and thus the wolf laguz tribe) closer to the other kingdoms of Tellius. It is never explicitly stated if Nailah was successful. 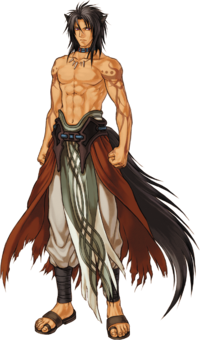 Wolves retain their ears and tails in their humanoid forms. The range of colors a wolf laguz can have is unknown, but Volug has gray fur, while Nailah has white fur; both not unusual colors for wolves. Both Volug and Nailah have markings covering much of their bodies, though whether these markings are natural, similar to the markings the dragons have, or traditional tattoos is unclear.

Judging by Volug's exploits during his time with Micaiah, wolf laguz are capable of passing themselves off as simple large dogs.[1]

Due to all wolf laguz being from Hatari, and Hatari being isolated from the rest of Tellius, most wolf laguz speak only in the ancient tongue. It is perfectly possible for a wolf laguz to learn the modern tongue through practice, though few have been exposed to the language.

Due to the wolf tribe's isolation, they never heard of the negative prejudices against the branded, and the wolf laguz of Hatari are some of the only laguz to consistently not bear ill will to Branded.

Wolves are not strangers to battle and attack with their teeth and claws when transformed, and with kicks in humanoid state.

Appearing exclusively in Fire Emblem: Radiant Dawn, Wolves are generally quite powerful, and excel in strength and speed. When attacking while transformed, wolves use their fangs (a form of Strike). When counterattacking untransformed, they defend themselves using kicks.

Wolves do not promote, as they are a laguz class. However, they can reach level 40 instead of the normal level cap of 20. After reaching level 30, wolves can use a Satori Sign to learn their Occult skill, Savage.

Note: Nailah's class is Wolf Queen, a unique Wolf variant exclusive to her.