The cats (Japanese: 猫 cat) are a laguz clan of Tellius and one of the beast tribes, along with the lions, tigers, and wolves. Cats primarily live in the Kingdom of Gallia, and are distinguished from their beast brethren by their impressive speed and agility.

Like both the beorc and the other laguz clans, the cat tribe is descended from the Zunanma. Following the covenant with the goddesses, the cats lived as equals with the beorc and other laguz in Begnion, then one of only two nations on Tellius, but over the years bigotry formed among the beorc toward the laguz, and the beorc slowly moved to consolidate absolute power over Begnion. Within two centuries, the Begnion senate declared that only beorc had the right to rule Begnion and established that the laguz were sub-human, and before long many laguz were captured and subjected to slavery under human masters. After 200 years of slavery, several beast laguz - cats among them - began to escape human captivity and fled to the western forests, far from human control, and eventually succeeded in establishing Gallia, a nation for the beast laguz.[1] Most cats then lived in Gallia for centuries afterward, while some remained in slavery in Begnion.

Cat laguz played prominent roles in the struggles between beorc and laguz in the following centuries. After the assassination of Apostle Misaha following her attempt to end laguz slavery, numerous ex-slave cats were part of the Laguz Emancipation Army led by Tormod and Muarim and fought to free slaves in Begnion. Cat warriors served in the Gallian army during both the Mad King's War of 645 and the Laguz Alliance war of 648. Numerous cats were also captured and subjected to the experiments of Izuka and were turned into Feral Ones. 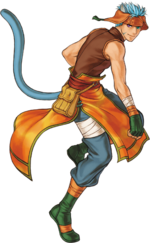 In their humanoid forms, cat laguz retain their cat ears and tails, with their ears mounted higher on their heads than those of the tiger laguz, and they also exhibit pointed whisker-like markings on their cheeks. They also retain distinctive cat eyes. Cat laguz have been seen with a variety of hair/fur colors, including yellow, orange, blue, brown and gray, although yellow appears to be the most common given its use for generic enemy cats. All known cat laguz are relatively thin and scrawny in their unshifted state, compared to the muscular enormity of the tigers and lions.

When transformed, cats physically resemble a domestic cat enlarged to the size of a panther or tiger. In this state, they are lithe and nimble fighters who rely on their immense agility more than simple strength, taking advantage of this to outwit and corner their prey.[2]

Cats have an adequately attuned ability to sense the presence of others of their kind. Theirs is the strongest grasp of the ability among the beast tribes, though they are less capable in the practice than the herons or dragons.[3]

Cats are present as a class in both Fire Emblem: Path of Radiance and Radiant Dawn. Of the four beast laguz tribes, Cats have a strong resemblance to Swordmasters in that while they lack raw strength, they make up for it with blistering speed; in Path of Radiance, Cats tie with Tibarn for the highest maximum speed stat of any laguz class, while in Radiant Dawn, they have the highest speed of the beast laguz. They are also considerably frailer than the other beast laguz classes, though like all laguz they mitigate this somewhat with their inherently enormous HP stats.

All Cats wield the Claw strike in both games, and are the only laguz class to continue to use Claws in Radiant Dawn instead of switching to Fangs. Like all laguz, in Path of Radiance Cats are only capable of attacking once they have shifted; Radiant Dawn gave Cats the ability to counter-attack enemies with kicks when unshifted, but they still cannot initiate battles themselves in this state.

In Path of Radiance, unshifted Cats are known by the class name Beast Tribe (Japanese: 獣牙族 Beast-Fang Tribe). In the localized versions of Radiant Dawn, they are called Cats in both shifted and unshifted states.