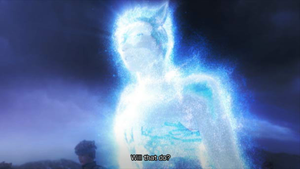 Ranulf, in the middle of shifting into his cat form.

In Fire Emblem: Path of Radiance and Radiant Dawn, laguz units are governed by a unique system of transformation which is known as shifting. Unlike other shapeshifter species from other games, such as manaketes, most laguz cannot instantly assume their beast form. Instead, they must first build up a transformation gauge (also known as the transform gauge) which allows them to shift when full, and once they have shifted, it will slowly deplete and force them to revert to their humanoid form once it reaches zero. When untransformed, the gauge fills by a small amount at the start of every turn and is increased if they are attacked, and when shifted it depletes at the start of every turn and when they participate in a battle.

Laguz must be shifted in order to attack enemies, with the transformation also giving them significant statistical bonuses which make them formidable, and conversely they are unable to attack when untransformed, only having the ability to give weak counter-attacks when attacked in Radiant Dawn.

In Path of Radiance, the transformation gauge requires 20 points for a laguz to transform. Transformation point gains are the same for all laguz classes, and are as follows:[1]

Each playable laguz (excluding the laguz royals) starts chapters with their transformation gauge set to a certain number of points, allowing some to transform faster than others.[1]

In Path of Radiance, laguz transformation awards a fixed set of stat boosts which do not change as the unit gains levels. All gains are halved if the unit is using a Demi Band to halfshift. These stat boosts are as follows:[1]

In Path of Radiance, three items have an effect on the mechanisms of laguz transformation. Two of these are equippable bands.

In Path of Radiance, shifting is now at the player's discretion and no longer automatic. Once a laguz's transform gauge is at maximum, a green icon reading "MAX" will appear over them on the map, and they can be shifted at any time by moving them and selecting the Shift command. Reversion is still automatic and occurs at the beginning of a laguz unit's phase once their transform gauge is empty, or at the end of a battle that empties their gauge. However, a shifted laguz unit can also be reverted at the player's discretion by moving them and selecting the Revert command; if reverted this way, they will keep any transform points they still had at that point.

In Radiant Dawn, the transformation gauge requires 30 points for a laguz to shift. Unlike in Path of Radiance, every laguz class now has unique transformation point gains.

In Radiant Dawn, laguz stat gains are changed considerably. Shifting now awards a 2× multiplication of the laguz's unshifted strength, magic, skill, speed, defense and resistance stats to all laguz classes; these gains are reduced to multiplying the stats by 1.5 if the unit is using Wildheart to halfshift. Additionally, the unit's movement, weight and constitution are awarded flat stat boosts, which are as follows:

In Radiant Dawn, three items and two skills have an effect on the mechanisms of laguz transformation.

Additionally, in Radiant Dawn, right before Rebirth (3), Yune blesses every laguz unit in the party. This grants them full transformation gauge at the start of each map and the ability to pierce the Mantle skill.

In Fire Emblem Cipher, shifting is present as a recurring skill found on laguz cards with higher costs, including Lethe, Ranulf, Volug, and Lyre. Shift is a Level S Skill which becomes permanently active if the unit is in a stack of 2 or more cards. When active, as long as the unit remains in the player's Vanguard, the laguz unit gets a +10 attack increase and is able to ignore their usual range restrictions to attack enemies positioned in their Rearguard.