This article is about a type of creature in Tokyo Mirage Sessions ♯FE. For the class from Awakening, see Mirage (class). 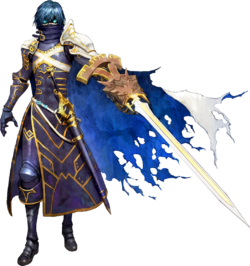 Chrom, appearing as a Mirage in Tokyo Mirage Sessions ♯FE.

In the context of the Tokyo Mirage Sessions ♯FE spinoff game, Mirages can me likened to Shin Megami Tensei's Demons.

In Tokyo Mirage Sessions ♯FE, Mirages are based on various characters from the Fire Emblem series in appearance and personality. Many Mirages are humanoid in appearance and size. However, this does not mean they are all completely humanoid in appearance. For instance, Aversa's Mirage incarnation can be somewhat likened to a Pegasus-Centaur beast. She has a humanoid torso and a pegasus body and wings. Medeus, an Earth Dragon Manakete, is a completely non-humanoid Mirage, having the form of a massive dragon.

Aside from the Mirages based off of Fire Emblem series characters, there are many lesser Mirages that don't appear to be anything Fire Emblem related. These come in may shapes and sizes. 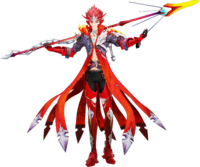 As mentioned above, the Mirages based on specific characters mostly appear for boss fights in the game's main chapters and sidequests. As is traditional, bosses generally appear at the ends of dungeons.

Aside from bosses, Tokyo Mirage Sessions's dungeons feature mirages as common enemies, with some being based on demons featuring in the Shin Megami Tensei series, some common Mirages are also based on classes in the Fire Emblem Series.

When the player explores a dungeon, the encounters are not random, enemy mirages can be seen in the dungeon and can be run away from or attacked. If the Mirage is attacked by Itsuki before the battle begins the player gets a First Strike when the battle is started, this means the player characters' turns are more likely to occur first in the encounter. Similarly, the player can suffer a disadvantage if the Mirage initiates the encounter first. There are also items that repel Mirages, preventing battles from occurring. A Mirage's appearance in a dungeon before initiating battle is generic, they look like a ghostly cloaked figure. When traversing dungeons, Chrom will warn Itsuki when enemy Mirages are near. 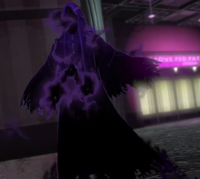 A savage Mirage appearing in a dungeon. 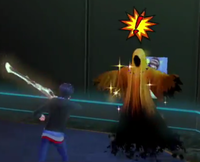 A rare Mirage appearing in a dungeon.

While a Mirage's appearance in-dungeon is mostly generic, there are some slightly alternate appearances to denote if the particular encounter has certain unusual characteristics.

However, not all Mirages in dungeons are out to attack Itsuki and friends, as there are several Mirages that will ask for favors and give minor sidequests. These Mirages can be walked up to and spoken to, these Mirages do not have the dark cloak that aggressive Mirages wear.

Virtually every random encounter in Tokyo Mirage Sessions is against a Mirage. Unlike the boss character Mirages, these Mirages are based on pop-culture and mythological themes, along with some being based on Fire Emblem series classes.