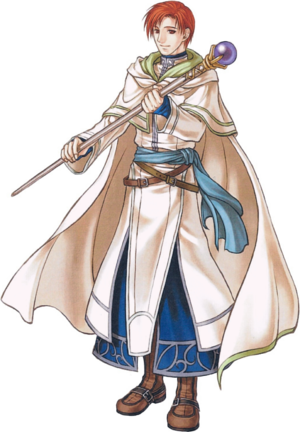 Beorc (pronounced /⁠biˈɔɹk⁠/[key][1]; Japanese: ベオク beorc), also known as "humans", are one of the two sentient races who inhabit the continent of Tellius in Fire Emblem: Path of Radiance and Radiant Dawn. They are the Tellius equivalent of the humans of both real-life and in other Fire Emblem games, and for all intents and purposes, they are almost exactly alike to humans.

In Tellius society, beorc have co-existed with the laguz. While some beorc claim otherwise, both laguz and beorc share a common ancestor race in the Zunanma. Beorc are commonly known as the "children of wisdom", contrasing how the laguz are called the "children of strength". Beorc overcome their often weaker physical stature with their ability to craft and use weaponry, tools, and magic.

For a comprehensive history of Tellius in general, see Timeline of Tellius.

The distinctions beorc and laguz were created by Ashunera in an attempt to quell the conflicts of the Zunanma; this proves ineffective to quell the fighting.

Relations between the beorc and laguz have been strained for millennia, owing to years of racial conflict and abuses of the laguz by the beorc. Even the very word "human" is deeply tied to these conflicts: beorc call themselves humans, meaning "the chosen", as a sign of their belief in their own superiority,[2] while the laguz use the word "human" as an insult toward the beorc.[3]

On rare occasions, beorc can interbreed with the laguz, often resulting in the Branded. The first child of a laguz and beorc was the child of Altina and Lehran, who was born around the founding of the laguz and beorc kingdom Begnion in the year -131. It was after this union that Lehran lost his heron powers, his ability to shift and sing galdrar. Lehran initially hid while he searched for a way to restore his powers, however he was unable to do so. Realizing this, he told Altina to find a beorc husband and claim the child was from the new union. After these events the Branded became stigmatized as "crimes against the goddess.", and beorc-laguz unions were forbidden, further sundering relations of the two races.[4]

In the following years many conflicts and societal changes lead to the founding of Crimea, Daein, Phoenicis, Kilvas, and Serenes, Crimea and Daein being beorc countries. In the year 642 the Begnion apostle Misaha declared the Laguz Emancipation Act, officially ending the slavery of laguz in Begnion. Unfortunately, Misaha was assassinated within the next year by the senate, whom blamed the assassination on the peaceful herons of Serenes. This drew the ire of the Begnion populace, which resulted in the Serenes Massacre, nearly wiping the heron laguz from the face of Tellus, and destroying any fresh goodwill the beorc and laguz had towards each other.

Shortly after this the Mad King's War begins by the machinations of Daein's titular Mad King Ashnard. This war lead to the freeing of laguz slaves from Begnion's underground slave economy by Ike. After the war Daein is occupied by Begnion, leading to Micaiah's Dawn Brigade alongside Prince Pelleas to reclaim control of Daein three years later. At this time Gallia, Kilvas, Phoenicis and the Greil Mercenaries form the Laguz Alliance, and declare war on Begnion in retaliation for the Serenes Massacre, having discovered that the Begnion senators were directly responsible. Even after this war, during which Ashera cast her judgement on all but a few laguz, beorc, and branded, causing an elite group to band together to defeat her, laguz-beorc relations are still strained millennia later.

The most concrete, and non-cultural, difference beorc have from humans in the rest of the series is that the beorc are descended from the ancient Tellian race known as the Zunanma.

While Beorc can produce children with laguz, these unions are unlike those between manakete and humans, or taguel and humans. Human and manakete or taguel pairs produce a child that will sometimes retain physical traits and powers of the non-human parent, the child from a laguz-beorc union looks like a completely normal beorc and lacks powers. Inversely, the laguz parent will actually lose their laguz powers, causing such unions to be incredibly taboo. Sometimes these pairs will produce a branded.

With regards to beorc reproduction, there is also somewhat odd existence of Priam, whom claims to be descended from Ike, a beorc, and his ability to produce a child with Robin, a human from Plegia. This implies that humans and beorc can also reproduce, due to Fire Emblem Awakening's introduction of a multiverse within the Fire Emblem series, though the exact implications of Priam's existence are unknown.

A beorc's average lifespan is about 60 years.[5] This is somewhat low compared to a modern-day human's lifespan in the real world, but a fairly generous age in a medieval setting. All laguz have much higher life expectancy than this.

While laguz fight using their own bodies as their weapons and need nothing else beyond that, a beorc body by itself is poorly equipped to fight. Instead, beorc forge and fight with weapons in place of any natural defenses. Beorc primarily fight with five types of weapon: swords, lances, axes, bows, and knives. Unlike the natural weapons of the laguz, beorc weapons wear out over time so a beorc army needs a consistent supply of weapons to use.

Some beorc are also capable of the use of magic, harnessing the powers of spirits and other entities for both offensive and defensive purposes.