The herons (Japanese: egret) are a laguz clan of Tellius and one of the bird tribes, along with the hawks and ravens. They once dwelled in the fallen Kingdom of Serenes, located in the Serenes Forest, but were driven to the point of extinction by the people of Begnion.

Like both the beorc and the other laguz clans, the heron tribe is descended from the Zunanma. Lehran, a companion of the goddess Ashera who played a pivotal role in the confinement of the "dark god" in a medallion, was a heron laguz and is the direct ancestor of the modern heron royal family.

The heron tribe historically called the Serenes Forest home, and as a result of their presence the forest took on something of a sacred significance to the people of Tellius.[1] However, unlike most people of Tellius, the herons questioned the role of Begnion's apostle as the true voice of the goddess. In the year 470, Begnion's war against the rest of Tellius led them to oppose the Begnion senate and declare their independence, forming the Kingdom of Serenes in the forest. However, their kingdom survived for only 155 years, as after the assassination of the apostle Misaha in 625, the senate spread a false rumor that the herons had been responsible for the crime. This sparked a violent mob of Begnion citizens to launch a mob attack on the forest. Within a matter of two days, the forest had been severely burned and the heron laguz had been driven to extinction.

Not counting Lehran, only five herons are known to have survived the Serenes Massacre, all of them members of the royal family. The king, Lorazieh, and his son Reyson were rescued by King Tibarn of Phoenicis and lived with him for the following twenty-three years, although the genocide left Lorazieh completely bed-ridden. The eldest prince, Rafiel, had been abducted by slavers some time before the massacre and only found out about it later. The princess Leanne was left in hiding by her sisters and spent twenty years sleeping under the forest's protection, while another princess, Lillia, was abducted by King Ashnard of Daein and eventually died in his custody. For a long time after the massacre, Reyson and Lorazieh were believed to be the last surviving herons, and Reyson had sworn vengeance on Begnion and the beorc for the extinction of his tribe, although he later reconsidered after the rediscovery of Leanne. 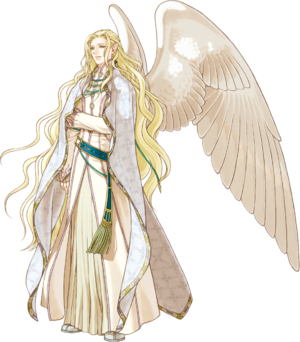 Rafiel is described as being an archetypical heron.

In their humanoid forms, the herons have historically been regarded by both laguz and beorc as pinnacles of beauty and grace. The majority of known herons have long, flowing blond hair, white feathered wings, green eyes, and pointed ears; they also typically wear white robes. There also exist herons who have black hair and wing feathers, although the only known black heron is Lehran.

Herons are very frail, and in the event that one attempts to physically attack another, odds are they will cause much more damage to themself than they do to their target, with a simple punch being likely to break their hand.[2] Similarly, they are very prone to sickness and poison and will often die very quickly to these without proper treatment.[3][4] If a heron is cut off from the natural world - for instance, if they are imprisoned in a windowless chamber - then this can worsen their condition.[5] They also weigh very little.[6] On the other hand, herons have the second-longest life spans of any living creature on Tellius, surpassed only by the dragons.[7]

While herons completely lack the raw physical power found in other laguz tribes, they make up for it with their innate aptitude for many arcane powers. Herons inherently have a deep attunement to the energies of order and balance. This also ensures that all known herons are capable of handling Lehran's Medallion without being driven berserk by its power. However, their sense of order also makes them extremely vulnerable to its power when it reacts to a severe state of chaos, at which point they will be debilitated and will pass out. One of the powers herons have as a result of their sense of balance is the ability to read the thoughts of others. However, this ability is distorted and blocked by chaotic energies, meaning the ability can only be properly used in peaceful, calm times and environments.[8] They are also the most widespread users of galdrar. Every heron has the ability to perform galdrar, but royal herons are the most powerful and can perform galdrar with the most potent results of all.[9]

Herons have an extremely attuned ability to sense the presence of others of their kind, likely the strongest of any laguz clan aside from the dragon tribe.[10] This also means that heron laguz can make effective use of sending stones to communicate across long distances.

As a result of their high attunement to the spirit of order, the heron clan was a pacifistic one which, in addition to being physically incapable of violence, also morally refused to do so. They lived peaceful and pious lives in Serenes, making no attempt to hone their powers for use in combat,[11] and they tended to be quiet, delicate, demure, and passive, avoiding anything resembling confrontation. This sometimes results in compulsive apologizing even where it isn't needed.[12] Similarly, they also had something of a passive, accepting approach to life, allowing change to happen around them without resistance even if that change resulted in their demise.[13]

After the Serenes Massacre, however, this changed significantly. Of the four known surviving herons, only Rafiel continued to behave much like a traditional heron. Reyson adopted a harsher, more resilient persona after years of living with the hawks of Phoenicis, while Leanne's twenty-year sleep left her with a more youthful and innocent persona.

Unlike most other laguz, herons adhere to a vegetarian diet, and strictly forbid hunting the animals of Serenes for food on moral grounds. The primary diet for herons is berries and nuts.[14] Consuming meat makes herons violently, physically ill.[15]

Because of their long life spans, the herons are one of the few societies which still primarily speak in the ancient language, in addition to their use of it for galdrar.[7]

Herons are present as a class in both Fire Emblem: Path of Radiance and Radiant Dawn. They are a support class with no combat ability of their own, and instead they are the equivalent of Dancers from other parts of the series, using their Canto/Galdrar skill to refresh allies who have already moved to let them move again. Radiant Dawn expands on this by giving Herons access to new chants with a variety of useful powers as they gain levels. While unlike other laguz units, Herons are capable of performing their role in battle without needing to shift, their shifted state improves their utility by increasing their movement and, in the case of Reyson, increasing the number of allies his chants can affect at once.

Statistically, Herons are extremely frail. Although they share the high HP stat of all laguz classes and have respectable resistance, their defense stat is among the worst of any class in either game, to the point that not even shifting does much to improve the stat at all. Since they (excluding Rafiel) count as flying units, they are also vulnerable to bows and wind magic, further exacerbating their frail defensive stats. Additionally, their mediocre speed leaves them very easily follow-up attacked. Leaving Herons within the range of enemies is extremely risky and dangerous, although at the very least their highest stat - luck - helps to give them decent, if unreliable, avoid. Due to their high resistance, they can serve as a decent tank to bait long-range tomes.

Herons have no natural means of attack available to them and are the only laguz class to not have a strike weapon of their own, nor can they (in Radiant Dawn) perform counterattacks if attacked at 1-range. However, in Radiant Dawn they are capable of using the Spectre Card, Reaper Card, and Daemon Card items to launch magical attacks.

In Path of Radiance, unshifted Herons are known by the class name Bird Tribe (Japanese: 鳥翼族 Bird-Wing Tribe). In the localized versions of Radiant Dawn, they are called Herons in both shifted and unshifted states.