Phoenicis (pronounced /⁠ˈfinɪkɪs⁠/[key][1]; Japanese: フェニキス Phoenicis) is a laguz-inhabited island nation on the south-eastern coast of Tellius. It is the home of the hawk clan of the bird tribes.

Phoenicis is situated in the South Sea of Tellius[2] and occupies the westernmost of three islands off the coasts of Goldoa and Begnion; Kilvas occupies a smaller island to its east. Its terrain is highly mountainous, and many of its inhabitants appear to build their dwellings into the faces of the mountains themselves. Since all of its inhabitants are bird laguz and are thus all able to fly, Phoenicis has no port infrastructure at all and, likely because of its mountainous nature, this leaves no way to access Phoenicis by ship and greatly limits ways into the country for those who cannot fly.[3] Phoenicisian cuisine specializes in seafood and in the use of berries whose trees grow in its highest peaks, which are used to make delicious juices and desserts.[4] 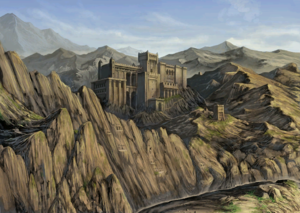 Phoenicis Hall and its surrounds. Doors and windows are visible on the mountain face beneath the hall.

Phoenicis as a nation has its origins in the Great Laguz Movement of 320, when the pressures of oppression and bigotry against laguz in Begnion grew too great. Members of the hawk and raven clans fled to the then-unexplored southern islands, and after Gallia was founded in 355, the birds who had fled called on their brethren who remained in Begnion to join them. While Begnion engaged Gallia in yet another war, the bird tribes took advantage of this confusion to assert themselves as a nation, leading to the foundation of the Kingdom of Phoenicis under King Horus. However, in the year 420, disagreements between the two clans of Phoenicis caused the ravens to leave Phoenicis and form their own country, Kilvas, on another of the southern islands.[5]

Phoenicis had long favored an isolationist standpoint and did not regularly engage in diplomatic relations with other nations, beorc or laguz. According to Janaff, many Phoenicians were entirely content to live by themselves without contact with the outside world.[2] For a time, the only country to be allied with Phoenicis was Serenes, until it was destroyed by beorc mobs in the Serenes Massacre. After the massacre, both Phoenicis and its king, Tibarn, declared all beorc to be their enemy. They took to piracy and joined the ravens of Kilvas in mercilessly raiding ships passing through their territory, although unlike Kilvas, the Phoenicians exclusively targeted Begnion ships as an act of revenge for the loss of the heron clan to Begnion citizens. These acts were all supported by the heron survivor Reyson.[6][7] Although Naesala of Kilvas readily pointed out that these tactics were so relied upon because the Phoenicians could not do anything more to express their grievances toward Begnion,[8] Phoenicisian pirates soon became greatly feared by Begnion for their surprise attacks on their vessels, earning them the nickname "Shipless Pirates".[9]

This stalemate persisted for twenty years after the Serenes Massacre, until the middle of the Mad King's War. The actions of Ike, Elincia, and Sanaki in defending Reyson and Leanne from Oliver earned the trust of the two surviving herons and Tibarn, opening the way for reconciliation between Phoenicis and the beorc.[10] Tibarn and the Phoenicisian army assisted Ike, Elincia, and their Crimean army in opposing the armies of Daein in the later stages of the Mad King's War.

Three years later, Phoenicis joined forces with Gallia, Kilvas, and Ike to form the Laguz Alliance, and declared war on the Begnion senate for its role in causing the Serenes Massacre. However, Kilvas had long been bound to Begnion in a blood pact, and they betrayed the Alliance and concocted a trap with the Begnion forces: while Tibarn and the Phoenicisian army were tricked into fighting Zelgius and the Begnion Central Army, the Kilvas army launched a savage attack on Phoenicis itself, slaughtering its male citizens of fighting age. There were already relatively few Phoenicians before this,[2] but the attack had a devastating effect on the population and left few survivors.[11] Despite this setback, the Pheonician army continued to fight in the conflict and eventually joined forces with Sanaki to retake control of Begnion from its corrupt senate. After the conflict ended, the Phoenicians put aside their differences with Kilvas and the three bird clans chose to abandon their former homes, become one unified nation and move into the Serenes Forest together, all under the rule of Tibarn.[12]