Nailah (Japanese: ニケ Nike) is the queen of the wolves of the kingdom of Hatari and a playable character in Fire Emblem: Radiant Dawn.

Nailah first appears as a playable unit in Part 1, Chapter 8 along with Rafiel; she returns in the Endgame of Part 1. In all of her Part 1 appearances, her death results in a Game Over.

She does not return again until she appears as an NPC in Part 3, Chapter 13, carrying Rafiel. She will attempt to reach Micaiah, but the turn limit will expire before then.

Nailah is a laguz royal that is available in chapter 1-8 and 1-E, and is forced into Ike's group in part 4. She has formshift which allows her to stay transformed without relying on items. Nailah can easily one-round every part 1 enemy unit, and she is bulky and very dodgy so she will never be at risk of dying. She has the highest mobility of the available units in 1-8 and 1-E, having 9 move and no or little movement penalties through indoors, thickets, and ledges. She can also rescue many units, including the Black Knight, can shove many non-mounted units, and can use Glare on units to allow babying weaker units. Her only weakness in part 1 is her lack of 2-range, which especially hurts her in 1-8 as there are many 2-range enemy units near her.

When Nailah is available in part 4, her stats are still high enough to one-round most enemy units, only struggling against generals on hard mode if she doesn't crit or activate Savage. She still has the durability and avoid to be exposed to extensive enemy phases, only being weak to fire magic if it hits. She still is limited to 1-range, so she cannot counterattack 2-range units. In endgame, she will double all enemy units except for Ashera's auras; she will not have enough power to one-round endgame generals on higher difficulties. She has a respectable resistance base for a laguz unit, so she will not be as vulnerable to endgame magic. Her growths are poor all around, only having a high luck growth; however, on average at level 40, she gains just enough strength and speed to fix her endgame offensive issues, doubling auras.

Nailah has Glare and Guard, both extremely situational skills that do not benefit her much. Guard in particular is unreliable and is better off removed and sold. Her mastery skill, Savage, will have a high activation rate due to her high skill, though her extreme biorhythm cycle will noticeably impact her activation rates. She is the best recipient of part 1's Pass skill, because with her high movement, it allows her to bypass all the ledge enemies in 1-E, creating a valuable shortcut for other units to access. However, this means her pass skill will not be available to reassign until 4-1. She can also make good use of Savior as she has the highest mobility of all of her available chapters before endgame, due to no indoor movement penalties for 1-E and 4-4.

Nailah has a wind affinity which gives a light accuracy and avoid boost. As her stats alone provide overkill accuracy and avoid until endgame, this is mostly unnecessary for her. Units that give an attack or avoid boost and are on Ike's part 4 team benefit her, particularly units with earth, fire, and dark affinities. It is worth noting that her bond support with Rafiel gives her a crit and crit avoid boost, and they share the same availability, so Rafiel makes a solid supporting unit for Nailah.

Nailah: Unflinching Eye is only available at 5★ rarity.

Nailah: Blessed Queen is only available at 5★ rarity.

Nailah: Hatari Scorcher is only available at 5★ rarity.

While Nailah has the pride, air, and manners of a queen, she can be distant, serious, and blunt. She is very quick to form bonds with others, be they Laguz, Beorc, or even Branded, forming a lasting friendship with Rafiel and a fast friendship with Micaiah.

Nailah, Mistress of the Evil Eye
Returning to Hatari with recent events graven in her hearth, Nailah hopes to migrate her people across the desert.

Nailah is featured on three cards in Fire Emblem Cipher. 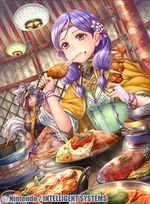 Additionally, Nailah can be seen in the background of P05-004PR, one of Ilyana's cards.