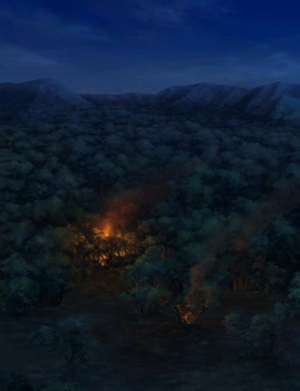 A fire set by the beorc mobs runs wild in the Serenes Forest at the height of the massacre.

The Serenes Massacre was a genocidal mob attack committed by the people of Begnion on the Serenes Forest as an act of vengeance for the assassination of the beloved Apostle Misaha. The attack resulted in the collapse of the Kingdom of Serenes, the near-extinction of the heron laguz tribe, and the destruction by fire of much of the forest.

The Kingdom of Serenes, populated entirely by the herons, was founded out of tensions with the rest of Begnion and its senate because its inhabitants questioned the validity of the title of apostle, bestowed upon its emperors. The territory was originally part of Begnion, but the herons seceded and founded their own nation within the bounds of Serenes Forest, their ancestral home, in the year 470, in protest of Begnion's war of continental conquest against the rest of Tellius. The herons continued to contest the legitimacy of the apostle's claims.[1]

In the year 595, Misaha took the throne of Begnion and the title of apostle, becoming immensely popular among the people of Begnion. Twenty-nine years into her rule, she passed the Laguz Emancipation Act into law, seeking to put an end to laguz slavery in Begnion for good despite the will of the senate. With immense public pressure mounting as a result of Misaha's leadership, Duke Lekain of the Begnion senate[2][3] orchestrated a plot to have Misaha assassinated to put a stop to her attempts to end laguz slavery, and to pin the blame for the crime on the herons under the pretense of their doubt of the apostle.[1] The plan was carried out in the year 625, with Misaha murdered and her infant granddaughter believed to have died along with her.

After Misaha's death, the senate issued an announcement of her demise and explicitly claimed in it that the herons had been responsible for the act.[4] The news enraged the citizens of Begnion, and within a matter of days, a violent mob erupted and converged on the edge of Serenes Forest, then marched into it. They set the forest alight with torches and burned it to a lifeless husk, with their point of entrance being burned especially harshly,[5] and by the end of the three days of the enraged mob behavior, the heron tribe was near-completely wiped out. 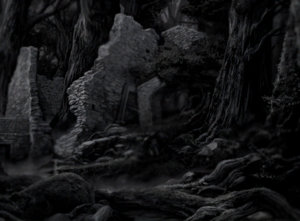 The ruined state of the forest, twenty years after the massacre.

Only five herons are known to have survived the Serenes Massacre, all of them members of the royal family. King Lorazieh and his son Reyson were rescued by King Tibarn of Phoenicis and entered his custody, although Lorazieh remained bedridden for decades afterward because of the massacre. The eldest prince, Rafiel, was in slave captivity at the time and was not present, and believed himself to be the only surviving heron for that reason. The young princess Leanne, then an infant, was believed to have been a victim as well, but actually spent twenty years asleep in hiding under the forest's protection, through the efforts of her sisters.[6] Another princess, Lillia, was abducted along with Lehran's Medallion and later died in Daein custody.

The massacre was viewed as an atrocity in all laguz nations, but the fellow bird tribes took it particularly hard. The hawk nation of Phoenicis chose to to completely refuse any further association or dealings with beorc nations and, as acts of revenge for the massacre, to turn to piracy and pillage Begnion ships. Reyson himself, in particular, was consumed by a desire for vengeance and justice against all beorc, with Tibarn acting on his behalf in matters of war.[7] This rift would not be mended until the year 645, when Leanne was rediscovered and rescued by Ike, and Misaha's successor Sanaki offered an apology to the surviving herons.

The forest itself was left completely abandoned in the aftermath of the massacre. The effects of the Begnion citizens' acts of arson fundamentally changed the forest for the years to come, leaving it scarred and rotting with no surviving growth, and turning much of its terrain into thick marsh.[8] To the people of Begnion in the years after the massacre, the ruins of the forest served as a grim reminder of the atrocities they had committed against the forest and the herons.[9] Many of the citizens who participated in the massacre themselves deeply regretted their actions, even decades later, often begging for forgiveness from the goddess.[10] It was not until the year 645 that the forest would be restored to its former glory, when Reyson and Leanne performed the galdr of rebirth at an altar in its heart. 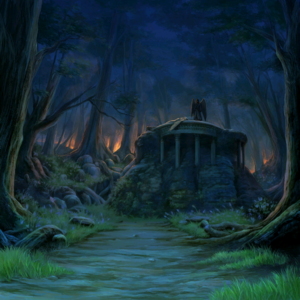 The senate's role in blaming the herons directly appears to have been quickly forgotten, and this part of the story never reached laguz nations. Instead, the common retelling of the massacre as of twenty years later claims that as far as anybody knew, the heron accusations were a rumor of unknown origin which quickly spread through Sienne.[11] During the Mad King's War, a mission at Palmeni Shrine led Ike and Reyson to the false conclusion that both Misaha's assassination and the rumors of heron involvement had been the work of King Ashnard of Daein as part of a plot to claim Lehran's Medallion.[12] The only person not involved in its orchestration to know of the senate's involvement was the survivor Rafiel, whose disappearance into the Grann Desert meant that he was not able to share this information with anybody in Tellius for twenty-three years. Once he did, however, all laguz nations save for Goldoa, along with the Greil Mercenaries, formed the Laguz Alliance and declared war on Begnion, demanding justice for their role in instigating the massacre.

With all of this going on, none were aware of the most significant fallout of the Serenes Massacre until it was too late. The ancient heron laguz Lehran, ancestor of Misaha, was not present in Serenes during the massacre and was driven to madness by the monstrosity of the act, having lost both his tribe and his descendant in a matter of days. In retaliation, Lehran became determined to bring about the awakening of the goddess Ashera to judge the people of Tellius for violating their pact of peace with her, and concocted an elaborate plan to orchestrate a continent-spanning war to trigger the release of Yune from the medallion and invoke the judgement. In pursuing this plan he was even willing to exploit the few surviving herons by leaving Lillia and the medallion with Ashnard and informing him of what the medallion could do if Lillia were to release Yune (ignoring that she could, in fact, not do so), setting up a crucial part of the Mad King's War.[13]