Horses (Japanese: 馬 horse) are a species of animal widely domesticated by humans, both in the Fire Emblem series and in real life, for use as steeds for a variety of purposes. In Fire Emblem games, horses primarily appear as combat mounts used by a variety of mounted classes, although they also appear as a class of their own in Fire Emblem: Radiant Dawn. 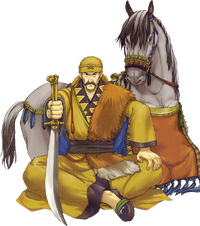 Dayan sits with his horse.

The horses of the Fire Emblem series are identical to their real-world counterparts: they are large, four-legged, hoofed mammals with distinct snouts, covered in a coat of short hair save for their long manes and tails. They come in a variety of hair colors, including brown, black, gray, gold and white; the coloration and appearance of horses also varies by region, as noted by how Gonzalez - a Western Isles native - commented to Dayan, a Sacaen, that his horse is of an unfamiliar color.[1] Horses possess significant strength and stamina, which is the primary reason for their domestication and use by humans.

In Fire Emblem, horses are closely related to pegasi, a species of winged horse-like creatures which are also widely used as steeds by humans. The exact relationship between the two species does not appear to be known in-universe, and it is uncertain whether pegasus evolved from horses by developing wings or vice versa.[2]

There are currently three explicitly named horses in the series, much fewer than wyverns or pegasi

Thirty-one classes have used horses as mounts throughout the Fire Emblem series.

Horses exist as an individual class only in Fire Emblem: Radiant Dawn. The class's sole appearance in the course of the game is in Part III, Chapter 3, where a small number of NPC horses are locked up in pens at the start of the chapter. As part of the chapter's objective, the player is encouraged to have the Greil Mercenaries release the horses to run amok in the Begnion senators' camp, and at the chapter's end the player will receive 100-200 bonus experience points for every horse to survive the chapter.

The horses themselves have negligible stats and are incapable of attacking on their own.