Roy engaging Idunn and her War Dragons in Fire Emblem: The Binding Blade.

War Dragons (Japanese: 戦闘竜 War Dragon) are artificial manakete that appear in Fire Emblem: The Binding Blade. They are alike to true manakete in every way, however, they "know nothing but battle",[1] implying that they may not be intelligent or that they lack emotion. 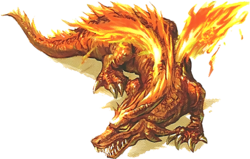 War dragons are somewhat similar to morphs in a general sense. They are artificial beings made to serve a purpose, in this instance they were made to wage battle. In their current single appearance they are born from Idunn. As stated, war dragons don't seem to have any emotional or general thought capability, being made for battle and rarely speaking. However this may be affected by the War Dragon's use as expendable soldiers in deadly wars.

They are able to transform into dragon form through the use of a firestone. The only war dragons that appear seem to be made in the image of fire dragons.

Humanity initiated a war with dragonkind, which became known as the Scouring. After humanity created several regalia weapons, the Binding Blade, Durandal, Armads, Forblaze, Aureola, Mulagir, Maltet, the Staff of the Saint, Apocalypse, and Eckesachs,[2] the world and the very laws of nature became broken and unstable, causing the Ending Winter.[3] This event caused the dragon tribes to be unable to maintain dragon form, and were thus forced to place their powers in dragonstones.[4] After this humanity gained a great advantage over dragonkind in the war,[5] adding on to the humans already present advantage of being able to reproduce more quickly.

During this great loss the warring dragons kidnapped a member of the divine dragon tribe, which had refused to participate, Idunn, and broke her mind and spirit so she would serve them.[6] This created what is known as the Demon Dragon. The Demon Dragon Idunn then created countless war dragons to turn the tide of the war, however, in the end, this plan failed and humans banished dragons from the realm. Most of the dragons are implied to have vanished through the Dragon's Gate. 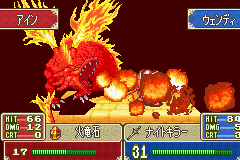 War dragons exclusively take the class of manakete, and are weak to dragon slaying weapons, like the wyrmslayer or Durandal.

War dragons appear throughout Binding Blade sparingly in the service of Bern, featuring as a powerful single enemy, relative to surrounding troops. The first war dragon encountered by Roy is the boss Ein in Chapter 12. One was present in the Bern invasion of Arcadia, as well as during Roy's assault on the Shrine of Seals.