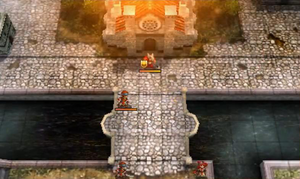 Garrick is the boss of Awakening's Prologue, and is marked as such by the shield icon in the corner of his sprite.

A boss (Japanese: ボス boss) or commander is a type of enemy unit who functions as the leader of an enemy army. Typically, there will be one boss unit per chapter, but there can be multiple. Bosses are often minor characters in the story, but major antagonists also take roles as bosses.

Bosses tend to be more powerful than the rest of the enemy army accompanying them, and will wield superior weapons. They also situate themselves on advantageous terrain types like forts, gates and thrones, have a portrait and actual dialogue, and are distinguished by specific boss battle music. Bosses generally remain stationary, but there are some bosses that move, with one random example being Bone from Fire Emblem: The Sacred Stones.

Defeating the boss is a common objective for chapters, and by default is also part of the rout objective. Since The Blazing Blade, a chapter's boss has been denoted by an icon in the corner of their sprite; the icon's contents vary from game to game, but it is often a shield.

In Genealogy of the Holy War, the sheer scope of its chapters result in each chapter having multiple bosses, upwards of four, fought in turn as the player's army travels between castles. The majority of the chapters commonly feature multiple bosses comprised of a lead boss and a number of mini-bosses, less powerful and important bosses typically encountered at a chapter's midpoint.

In Genealogy of the Holy War, Thracia 776 and Radiant Dawn, bosses will also often have one to five authority points to aid their army. While for the most part bosses remain enemies for their entire presence in a game, there are rare examples of bosses who can be recruited by the player, like Tiki, Hannibal, Perne and Oliver; in Trial Maps and similar modes, it is also common to allow the player to use plot-critical bosses in their army as a reward for game completion. 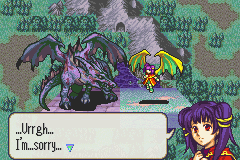 Myrrh apologizes to Morva; an example of a boss quote.

Across the series typically more important bosses get customized conversations with certain characters, typically the characters that have these conversations are acquainted with each other. Boss quotes can vary in length, with dialogue ranging from quick insults to lengthy conversations.

On much rarer occasions bosses will have varying death quotes depending on who defeats them. Saizo killing Kotaro in Fire Emblem Fates is one example.

Non-personal quotes are in every game, although the Famicom installments reserve them for important bosses. Boss death quotes are even rarer in these games. Mystery of the Emblem standardized every boss having a battle and death quote. Personal battle quotes were introduced in Genealogy of the Holy War.

"Boss abuse" is the act of exploiting a boss for the purposes of experience gain. By taking advantage of the consistent stream of boss healing per turn from their occupied terrain, players can waste a boss's weapon until it breaks and is left helpless, then have a lower-level slowly chip away at the defenseless boss as a way to gain easy, if time-consuming, experience. Alternatively, the boss can be attacked at ranges from which it cannot counterattack, such as attacking a bow-using boss at one range.

Some games have measures to prevent this; for instance, in Awakening's Lunatic Mode, attacking a boss repeatedly in this manner produces diminishing returns of experience until it is no longer gained at all.