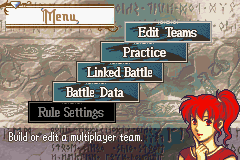 The Link Arena's main menu in The Sacred Stones.

The Link Arena (Japanese: 通信闘技場 Communication Arena) is the multiplayer mode of the three Game Boy Advance installments in the Fire Emblem series. It is a mode where two to four players, each with their own copy of the same game in the series and the requisite number of link cables to connect the systems together, form teams of up to five units each and face each other in arena-style combat. The Sacred Stones, designed and released after the release of the GBA wireless adapter, is not compatible with the wireless adapter (the other two GBA games in the series predate the wireless adapter and are therefore also not compatible with it). 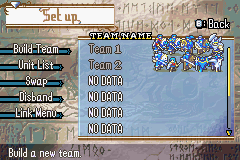 Players must first use the "Edit Teams" option to build their teams. Selecting "Build Team" allows the player to create a team; the player chooses one of their save files, then selects up to five units in a preparations phase. Players can set up units' inventories within the preparations phase, negating the need to do so within the single player mode. Once the player has picked their units and set them up, the team is saved once the Start button is pressed on the unit selection screen.

For a unit to join a team, they must have at least one usable weapon in their inventory; this normally excludes Bards and Dancers from the Link Arena as they cannot inherently wield weapons, although both are programmed to be able to take part in the Link Arena should they somehow be given a usable weapon (normally a piece of dark magic inaccessible to the player). Manaketes may not be included in any team, nor can units exclusive to The Binding Blade's Trial Maps or unlocked via The Sacred Stones's Creature Campaign.

"Unit List" allows players to view the statistics of teams already built. "Swap" allows the order of already-built teams to be swapped in the list order. Teams are deleted with the "Disband" option. 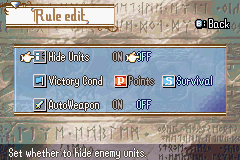 Players can tweak the exact rules of the battle using the "Rule Settings" option. There are three options under these settings: 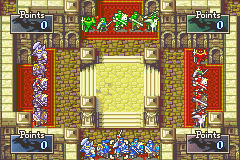 The Link Arena map in The Sacred Stones. 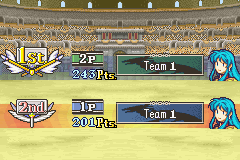 The results of a practice Link Arena match in The Sacred Stones.

Once a player chooses "Linked Battle", that player selects one of their teams and waits for the other players to do likewise; once all players select their teams, the battle will begin. The Link Arena also includes a "Practice" option, where a single player can take one of their teams and face them off against other teams of theirs controlled by the CPU; in this situation, the player sets the team they wish to control into the blue slot and the teams the CPU is to control into the other slots.

Gameplay goes counterclockwise from the bottom starting with the blue team (player 1), followed by the red team (player 3), the green team (player 2), and the purple team (player 4), with any team slot not present skipped over. The player whose turn it is selects one of their units, followed by one of the other players' units and then one of their weapons. Once these selections are made, a single round of combat begins. Units that survive the round earn points based on the experience formula. In The Binding Blade and The Blazing Blade, it is possible to make moves that score zero points; all moves score points in The Sacred Stones with the exception of the defeat of one of a player's units on the side of the player losing that unit. Gameplay continues until only one player has any units left standing. The last player with units standing will receive 30 additional points for each of their remaining units. If the victory condition is set to Survival, the last player standing wins; if the victory condition is set to Points, the player with the most points at the end of the battle wins. 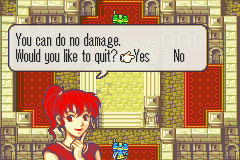 Being unable to inflict damage in The Blazing Blade.

In the practice mode, gameplay can be ended early by pressing the Start button and answering yes when Anna asks the player if they wish to surrender. In the event two or more teams that are unable to do any damage to one other face off in the Link Arena, after three full turns in such conditions, Anna will tell players that the teams aren't doing any damage and ask if they would like to end the game.[1]

Most non-weapon items have no function in the Link Arena, i.e. players cannot heal themselves with vulneraries; the only non-weapon items that function in the Link Arena are the accessory items that nullify bonus damage to fliers (Delphi Shield in The Binding Blade and The Blazing Blade, Fili Shield in The Sacred Stones) and nullify critical hits (Iron Rune in Fire Emblem, Hoplon Guard in The Sacred Stones). Staves also play no role in the Link Arena. Long-range tomes do not activate in the Link Arena, nor would a ballista in the event one is hacked into an inventory; if one is in the equipped item position when their holder is attacked, only the attacker will get their strikes in. In cases where a weapon with 1 range fights against a weapon with 2 range, only the attacker will initiate their strikes; weapons with 1-2 range can take on any other usable weapon regardless of its range properties, fighting within range 1 should two 1-2 range weapons face each other.

The players' high scores are saved under the "Battle Data" option. High scores list the name of the team that achieved the listed score, along with the victory condition, their rank within the battle, and the number of players in the battle.