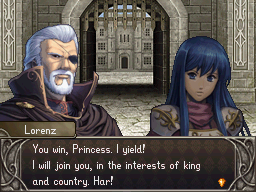 Recruitment (Japanese: 仲間入り joining) is the term used to describe the act of gaining a new controllable unit in the player's army in the Fire Emblem series. As games progress, the player can gain more units to expand on their army, introducing more diversity into their forces. Recruitment is accomplished by a wide variety of means, usually based on directly talking to other units out in the field.

In many cases, a unit will automatically join the player's army at the beginning, end or during a chapter, or even while preparing. There are some such units who may require additional criteria to be met for them to appear. In Path of Radiance and Radiant Dawn, this also extends to conversations which occur at the player's base, which are possible to miss through not viewing the conversation in question. Similarly, this is the only recruitment method in Fire Emblem Gaiden, with recruitment conversations optionally occurring by visiting villages, forts or castles after clearing them of enemies. In Awakening, Donnel is recruited at the start of his paralogue, but will leave the army if he is defeated or does not level up at least once.

The most frequent form of recruitment is to use the talk command on specific enemy units with certain characters and persuade them to defect to the player's army. Recruitable enemies are usually readily distinguishable in that they are not generic, actually possess an identifiable name and face, and in most cases are not the chapter's boss.

Talking to neutral or partner units

A variation on the above, on occasion neutral or partner units will appear on the map and can again be talked to by specific units, typically the army's leader, in order to recruit them.

Some units can be recruited by visiting a village in which they reside.

Hiring for a fee

Some enemy or neutral units require to be paid a sum of gold in order to be recruited. The payment required varies for each character, but is typically within the range of 10,000G.

Examples of other requirements

On rare occasions, the recruitment of certain units has more complicated and obscure requirements which typically require a certain amount of prior knowledge to actually succeed.

In Fire Emblem: Path of Radiance and Radiant Dawn, in rare instances it is possible for units in the player's army to actually be recruited by the enemy by talking to certain enemy units. The sole unit capable of doing this in Path of Radiance is Jill, who is recruited back into the enemy by talking to Shiharam in Chapter 20; in this case, she cannot be re-recruited by the player. In Part 3 Radiant Dawn, Jill and Zihark can be recruited by members of either army as the player's perspective shifts between them, and will join the opposite side in certain chapters if they speak to certain enemy units (Haar or Mist for Jill, Lethe and Mordecai for Zihark).

Common reasons for joining the player and examples of characters who did so include: