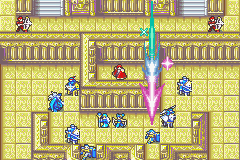 Heavenly Arrows are a hazard present in Chapter 16x of Fire Emblem: The Binding Blade.

Occasionally, a map will include a hazard where the terrain or architecture of a map itself can cause harm to the units participating in a battle. Hazards effectively trigger themselves independent of what either participating army wants, often at random or in a pattern, and have a variety of effects which range from simple damage to inflicting status effects.

These were introduced in Fire Emblem: Thracia 776 and appear only in it and Fates. Warp traps look like completely ordinary ground tiles at first, but if a unit ends their turn on one of these tiles, they will be involuntarily warped to a certain point on the map. In Thracia 776 they remain invisible no matter how many times they are triggered, but in Fates they instead become visible when triggered once, making them somewhat less frustrating than their Thracia 776 incarnation.

A lava geyser explodes on an enemy Lance General in Part III, Chapter 8 of Radiant Dawn.

These are a hazard present in volcanic locations, and were introduced in Fire Emblem: The Binding Blade. Geysers are normal ground terrain tiles which can be crossed as usual by any unit, but are distinguished with a red pattern. At the end of each enemy phase, a random number of geysers*/any geysers which are currently being stood upon by a unit of any affiliation* will erupt and inflict 10 damage. 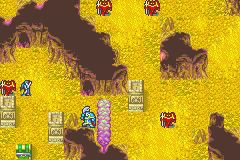 A poison jet blasts an enemy Thief in Chapter 30H of Fire Emblem: The Blazing Blade.

Poison jets were introduced in Fire Emblem: The Binding Blade and are a feature of maps set in dank caverns. These protrude from the walls of these caverns, and at the end of the enemy phase, two random poison jets*/those with a unit in their path* will go off and blast poisonous gas in a straight line of three tiles. Any units who are hit with a jet will sustain poison status.

The Heavenly Arrows were introduced in Fire Emblem: The Binding Blade as a minor plot element in the Aureola sidequest. At the end of each turn, a Heavenly Arrow will rain down the length of the map in a straight line one tile wide, inflicting 10 damage on every unit in its path. Each turn will have its Heavenly Arrow descend from a different point across the top of the map.

These simple traps in Fire Emblem: The Binding Blade are single-use hazards which are invisible and indistinguishable from ordinary terrain. When a mine trap is waited on, it will explode, cause 10 damage to the unit who treads on it. However, Thieves will automatically disarm the trap before it explodes if they are the ones to step on it. While pre-set mine traps do not return in subsequent games, the Mine item behaves nearly identically when set in the latter two Game Boy Advance games.[1]

The following map features mine traps: 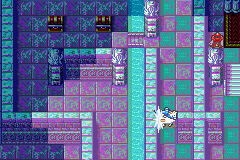 Perceval gets caught in a spike trap in Chapter 21x of The Binding Blade.

These traps in Fire Emblem: The Binding Blade are built into the walls of narrow corridors. If a unit waits next to a trapped wall, a spear will shoot out of the wall and injure them, inflicting a base 10 physical damage; unlike other traps, the trap's damage can be protected against by the victim's defense stat, and can even be completely nullified if the victim has 10 or higher defense.[1] Thieves will automatically disarm the trap before it activates if they are the ones to step into it. 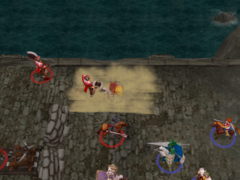 Makalov falls into a pitfall in Chapter 23 of Path of Radiance.

Pitfalls were introduced in Fire Emblem: Path of Radiance and in both appearances are used only on the same location: Oribes Bridge, in Daein. Pitfall tiles are scattered across the respective maps, completely unmarked, and when a unit of either affiliation steps on one they will fall into it and sustain stun status for a single turn. Triggering a pitfall turns that tile into uncrossable hole terrain, and while the unit who triggered the trap is able to move out of the hole after the stun wears off, nobody can stand on it afterward; non-flying units cannot pass the hole at all, and flying units are not allowed to stand on it.

Untriggered pitfalls can be avoided entirely if a flying unit is stationed on top of the trap's location. Flying units will never trigger pitfalls, so if they wait on top of a pitfall, non-flying units will be able to harmlessly cross the terrain without triggering the trap.

In Radiant Dawn, holes act like a lower plane of altitude while a unit is still in them, so anybody attacking a unit trapped in a pitfall gains the standard height-advantage bonuses on top of the pitfall victim's inability to retaliate.

This hazard appears only in a single DLC episode in Fire Emblem Awakening, where most of the map's terrain is lined with distinct spiked tiles. At the end of each enemy phase, a dark explosion occurs that instantly reduces the HP of all units standing on the spiked floor to 1, regardless of affiliation; units who stand on the proper ground surrounding the spikes are unharmed.