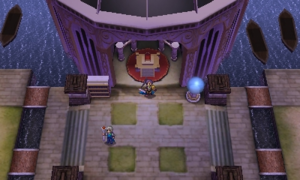 Throne area of My Castle.

My Castle (Japanese: マイキャッスル My Castle) is an out-of-battle management feature in Fire Emblem Fates. In every chapter once it has been unlocked, the player is brought to My Castle first and is allowed to freely take their time there to attend to both tasks to manage unit performance in battle and side tasks for fun. The player is tasked with developing their My Castle by collecting resources to build and improve buildings to get access to progressively better goods and services, including shops, arenas, food services, prisons, and sources from which to harvest even more resources. It is also the central hub of StreetPass and other multiplayer engagements with other players, like Awakening's StreetPass skirmishes on the world map.

My Castle combines elements from prior out-of-battle options such as castles in Genealogy of the Holy War, the base of Path of Radiance and Radiant Dawn, and Everyone's Conditions and the Barracks from New Mystery of the Emblem and Awakening respectively. While in their My Castle, the player - playing as their avatar - is allowed to freely walk around the castle map to enter and exit buildings, unhindered by movement and the grid, a feature last seen in Fire Emblem Gaiden. My Castle can also be viewed from an over-the-shoulder mode, allowing more detailed models of the facilities and characters to be viewed, though movement is not possible in this mode. The current members of the player's army can be found acting as vendors in facilities or around the castle grounds, where they can be freely spoken to. These characters will sometimes have an exclamation mark above their head and, when talked to, will provide a random resource, increase their support with another character, or ask to be given an accessory (increasing their support towards Corrin if the player accepts).

My Castle is located in a pocket dimension inhabited by the Astral Dragons.[1]

The default name of the player's castle is Ft. Corrin ("Corrin" being substituted with whatever the player named his or her avatar).

The dusk dragon statue, available only in Nohr.

An important gameplay difference is that if the player is playing Conquest, My Castle facilities will not award experience. In Birthright and Revelation, there are experience-granting activities.

There are two sets of three styles, one exclusive to Birthright, one exclusive to Conquest. Revelation has both sets and no unique styles of its own. Styles change the appearance and layout of the player's castle.

The time of day in the My Castle does not correspond to the time of day on the Nintendo 3DS. Rather, the time will advance (morning to afternoon to evening to night to morning) after every map played. The time affects the ambience of the castle, when certain buildings can be interacted with again, and what units will say when talked to.

Resources are various items gained within My Castle, these items have no use outside of My Castle. Resources range from food to gemstones. Resources are often obtained by speaking with characters or using designated facilities. Every My Castle is randomly assigned one food and one ore building by the game that corresponds to their chosen faction. However, in Revelation, four random resources are automatically given: one Hoshidan Food, one Nohrian Food, one Hoshidan Ore and one Nohrian Ore.

Different types of resources can be obtained by visiting other Castles via the Internet or randomly found by characters in My Castle or on event tiles at maps.

There are various facilities in the My Castle feature. Facilities are created and upgraded with Dragon Vein points (abbreviated as "DVP" in-game).

Facilities are also obstacles in StreetPass battles. They can be destroyed by the opponent or the player to open up new avenues for attack. All facilities are restored at the end of a fight.

The appearance of the Private Quarters.

The Private Quarters (Japanese: マイルーム My Room) is a facility available from the start. It is a tree-house. When Corrin enters their room there are two available activities: Corrin can change their hairstyle or interact with allies in a minigame. The player can only invite characters during the afternoon or night; otherwise, they are limited to changing Corrin's hairstyle on all times during the day. 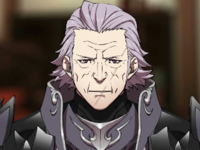 Interacting with allies in the Japanese release of the game comprises of a minigame where the player uses the stylus to touch characters' faces to raise their bonds. In international versions, the touching minigame is removed entirely, though all other characters still speak to the player and support points are still gained. Characters of either sex can be interacted with regardless of Corrin's sex. There are two versions of the interaction feature, a general one for all units, and a specific mode for Corrin's spouse, dialogue and interactions are different between these two modes. If Corrin is married, the player can blow on the 3DS microphone to cool off their spouse if they have just come out of the bathhouse. If the player finds their spouse asleep, they can either tap on the stylus to wake the spouse up, though they will respond negatively, or gently touch them with the stylus for the same reason.

There are two versions of the armory, the Hoshidan Dawn Armory (Japanese: 白夜武器屋 White Night weapon shop) and the Nohrian Dusk Armory (Japanese: 暗夜武器屋 Dark Night weapon shop). Each armory sells weapons from their respective country, the Dawn Armory sells Hoshidan weapons, like katana, naginata, and clubs. Dusk Armories sell traditional Nohrian weapons, like swords, lances and axes. The Dawn Armory is exclusive to Birthright and Revelation, while the Dusk Armory is exclusive to Conquest and Revelation.

The armories are run by a randomly chosen member of the player's current party. The character running the armory has an important effect, giving a 5% discount on what weapons their current class specializes in. For instance, Arthur gives a discount for axes as a Fighter or Berserker, but will discount swords when made a Hero. Hoshidan and Nohrian counterpart weapon types are considered a single type for this purpose; for example, a shuriken-specialist Ninja in the Dusk Armory will provide a sale effect on daggers. When upgraded, more powerful weapons are available for purchase.

There are two versions of the vendor, the Hoshidan Rod Shop (Japanese: 白夜道具屋 White Night item shop) and the Nohrian Staff Store (Japanese: 暗夜道具屋 Dark Night item shop). Vendors sell staves of the type native to their country, along with various items. Like the armory, a character is chosen randomly to run the shop. If a character's current class is proficient in staves/rods or beaststones, they will have a 5% discounted price. As no playable class has a primary proficiency in dragonstones, beaststone-proficient classes put dragonstones on sale in addition to beaststones as compensation.

The arena returns in this game, functioning like previous arenas, however, the reward for winning is not money, and instead the resource that was bet at the start of the round. A character is randomly placed in the arena from the player's roster, the player cannot specifically choose who to allow into the arena outside of a special case outlined below.

When the arena is upgraded, units may participate in back-to-back rounds of combat, earning even more of the chosen resource, though this is more risky as not all of the HP lost is healed between matches.

Niles and Effie teamed up for an arena battle.

When the allying character appears the player may choose the person with the primary combat role in the next arena round, this is useful as the player's arena combatant is generally chosen randomly by the game. Regardless of winning or losing all rounds available, the player can only use the arena once before the time of day changes again.

The prison facility is a new feature introduced in Fates. It works alongside Niles' Kidnap skill or Orochi's Capture skill. When Niles or Orochi capture an enemy unit, that unit is place into the prison. Prisoners can be persuaded to join with the randomly selected unit currently running the facility, which may take several tries, or can be recruited instantly by bribing them with resources.

The accessory shop is an entirely new feature. This is a shop where the player may buy accessories for their units. These accessories can be worn all units. Accessories provide minor combat bonuses, however, accessories and their bonuses are only available within the My Castle feature.

Accessories are bought and created with resources.

Inside the mess hall

Another new facility, the mess hall is a facility where food is prepared for the player's troops, using the player's food resources. Like the armory and vendor, a character is chosen randomly to run the cafeteria. When the character prepares food in the cafeteria it is prepared for half of the army at levels 1 and 2 and for the entire army at level 3. At level 1, only one food resource may be used, while at levels 2 and 3, two resources may be used for the meal. The bonuses given by the prepared food depends on the resources used, as well as the character cooking. For example, Setsuna and Felicia are more likely to cook bad food that lowers stats, while Peri and Percy are more likely to cook great food that increases all stats, plus a random stat again.

The stat bonuses granted by cafeteria food last for one map.

The lottery shop is a facility where the player can roll for a prize and is run by a randomly chosen member of the player's current party. Various items can be won this way. The player gets a chance to roll for a prize each afternoon. The higher the Lottery Shop Level, the better the chances of acquiring rare items.

Rolling for a prize in the lottery.

Inside the hot spring

Lilith's temple is the home of Lilith, an Astral Dragon. Within the shrine, Lilith can be fed food resources to make her level-up. Lilith appears during StreetPass battles and castle invasions to aid the player as a NPC unit.

The Records Hall is a building in My Castle where the player can view unlocked support conversations, read ally details and ancient texts, watch cinematic cutscenes, listen to music from the game, or have the Rainbow Sage test unit compatibility.

The Unit Roster option allows players to obtain character profiles. Upon opening the Roster, the player is presented with a list of playable characters ever obtained (including both genders of Kana), ordered and numbered by recruitment order in Birthright and Conquest. To the left of the list is the highlighted character's full portrait. Pressing A on a highlighted character will update the bottom screen with that character's bio.

StreetPassing with other players is also a feature that affects My Castle. It generally works similarly to Awakening's StreetPass features. When Fates receives StreetPass data the other player's units appear in My Castle in the traveler's plaza facility. Visiting units can be challenged to battle, or the player can purchase units from the visiting units.

The foreign castle can be visited by the player. StreetPass is important for obtaining a wider variety of resources, as the variety available in a single My Castle is limited, and more resources can be obtained from characters in other people's castles.

At three points in a campaign, players have the opportunity to fight off a wave of invaders attempting to attack their My Castle. These battles are pre-set skirmishes that, while the player is not required to deploy Corrin like other battles in a My Castle as well as object effects applying, it is otherwise treated in a similar fashion to a battle in the field, including units not returning after defeat in Classic Mode, Corrin's death triggering a Game Over, and being able to gain experience and weapon experience in Conquest. Each of the three campaigns have their own enemy combinations for the invasions.