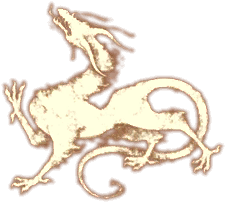 One of the dragon figures that appears when using a Dragon Vein.

Dragon Vein (Japanese: 竜脈 Dragon's Vein) is a special ability introduced in Fire Emblem Fates which allows its user to alter the terrain around them to their tactical advantage, for instance, forming a bridge out of stone where there was nothing before, or draining water to form a path through a river. It is possessed by the royal families of Nohr, Hoshido, and Valla. The ability itself is claimed by both royal families to be inherited from a dragon ancestor.[1] In actuality, however, it comes from their ancestors drinking the blood of the First Dragons, working similarly to Holy Blood in Jugdral.

In gameplay, Dragon Veins are shown by a glowing orb on a tile in the map. Units that can use Dragon Vein have a crown icon (

) next to their name. A unit with Dragon Vein should move to the tile with this orb and select the "Dragon Vein" option, and the terrain will change based on context. Units of any allegiance can use dragon veins, though use of it by enemies is uncommon.

The effects of the vein when activated are incredibly context sensitive, though the same dragon vein will always have the same effect in subsequent playthroughs. The effects are not hidden from the player, if the cursor is placed over the Vein the game will display a short amount of text describing the Vein's effects. These effects can be beneficial or detrimental, so the player should take them into account.

Dragon Vein is also part of the My Castle feature, in the form of Dragon Vein Points. Dragon Vein Points are required to build and upgrade facilities. One point is gained per completed battle, be they main story chapters, paralogues, skirmishes, or Streetpass battles. The maximum Dragon Vein points a player can have is 99.

) next to their name on their stat profiles. There are sixteen playable characters who will always have the ability to access Dragon Veins:

Also, the DLC item First Blood will give any other playable unit the Dragon Vein ability when used on them, regardless of their heritage.

There are also several enemy characters that have Dragon Vein access. Their utilization of the ability is generally restricted to scripted events, or on specific turns during a chapter. Any playable character who can use Dragon Veins can also use them as an enemy.

Dragon Veins appear as a special type of skill in Fire Emblem Cipher, and were introduced in the sixth series. Skills which are marked with

are classed as Dragon Vein skills, tend to be very powerful and have unconventional effects, and are paid for by flipping one orb card face-up, optionally with an additional cost in bond cards. 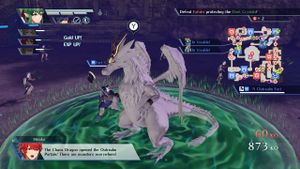 Tiki standing on a Dragon Vein in Warriors.

Dragon Veins appear in Fire Emblem Warriors in forts. A fort must first be seized by the player to be used by one of the player's units. The effects of a Dragon Vein are contextual, they can open new paths or nullify hazards. Activating a dragon vein can be optional or required depending on the particular battle, some simply provide shortcuts while others allow access to required areas. To activate a dragon vein have a player controlled unit stand atop the green pool representing it and press the Y button. Unlike in Fates any character can activate a Dragon Vein in Warriors.