Some games in the Fire Emblem series feature a system which allows the player to issue generic orders to all allied units who have not moved yet. Activating one of these commands has the game's AI move the units for the player, often following one of several generic strategy patterns chosen by the player as their orders. 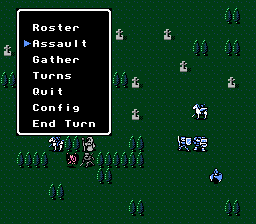 In Gaiden, the player has two auto-battle commands, which the player can select from the menu at any time when in battle.

Echoes: Shadows of Valentia retains these two options, as well as adding two new ones. They are unlocked during Act 1, Zofia's Call, rather than being immediately available as in Gaiden.

Order redirects here. For the chapter in Fates, see Orders.

Both games feature the Order command, which allows the player to select one of four generic orders for units they have not moved to complete automatically once the player chooses to end the current turn. Orders are issued through a menu command when moving the current lord character (Ike in Path of Radiance; Ike, Micaiah, Elincia, Geoffrey, Lucia, Nephenee or Tibarn, depending on the current chapter, in Radiant Dawn), and remain in effect for all subsequent turns until the player gives another Order.

In addition to the Order command for playable units, when yellow partner units are present on the map, the player has the option of issuing Direct commands which, while still not directly controlling them, give them generalized directions on how to aid the player. These are issued the same way as menu commands when moving the current lord character, and will remain in effect until another Direct is issued.

When "Advanced Auto" is enabled in the options, (When a new game begins in casual mode, Advanced Auto is disabled), there are 4 Different orders the player can give to ALL units; including Chrom and Corrin:

Auto-Battle can be cancelled while it is in progress by pressing the X Button, returning unit control to the player. 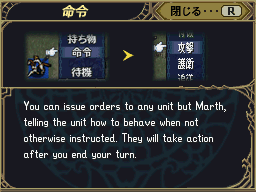