The Levin Sword (Japanese: サンダーソード Thunder Sword), also known as the Lightning Sword (Japanese: いかづちの剣 Thunder Sword), is a recurring magic sword introduced in Fire Emblem: Shadow Dragon & the Blade of Light, and the first of its kind in the Fire Emblem series. It uses thunder magic to attack both at close range and over a distance. Since Genealogy of the Holy War it deals magical damage to foes that targets their resistance stat instead of their defense, and uses the wielder's magic stat instead of their strength to calculate damage (with the exception of Echoes: Shadows of Valentia, where there is no separate magic stat). Depending on the individual game, it may have other effects. 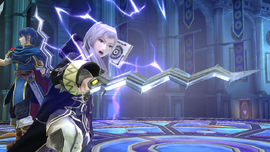 Robin wielding the Levin Sword in Super Smash Bros. for Wii U. Behind her, a broken Levin Sword which she discarded earlier is being held by Marth.

Robin wields the Awakening version of the Levin Sword in Super Smash Bros. for Nintendo 3DS and Wii U. They use it for physical smash attacks and aerial attacks, instead of the Bronze Sword which they use for their other physical attacks. Attacks with the Levin Sword are stronger than those with the Bronze Sword, have greater reach and have an electrical effect which very briefly stuns the target.

Like Robin's tome special moves, the Levin Sword is affected by an emulation of the Fire Emblem durability system, and so can only be used eight times before it breaks and cannot be used again. Robin must then wait out a six-second recharge period before it becomes usable again. While waiting for it to recharge, the Bronze Sword temporarily replaces it in Robin's smash and aerial attacks, dealing less damage.[1] As with their tomes, Robin throws away their broken Levin Swords, and either Robin themself or any other character can catch it before it hits the ground, then throw the sword at their enemies to cause decent damage.

The Levin Sword is present as a skill on three cards in Fire Emblem Cipher: S01-004ST Steel Swordsman, Ogma, B01-049N Myrmidon from Parts Unknown, Athena, and B04-079N Khan Lioness, Flavia. It is a manual-activation skill which, for a cost of flipping 1 bond, modifies its user's weapon type from sword to tome and increases their range to 1-2, but also gives them -10 attack power. The skill wears off at the end of the turn.

Additionally, Gray (B09-007SR Composed Prodigy) is depicted wielding a Lightning Sword and has the skill Lightning Sword Finisher. It is a manual-activation skill that can only be used when Gray's attack power is at 100 points or higher, achieved by his skills and/or those of his allies. If this condition is met, then once per turn the player can untap Gray for no cost, and if they do, this skill modifies Gray's weapon type from sword to tome and increases his range to 1-2. The skill wears off at the end of the turn.