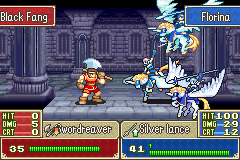 The Triangle Attack (Japanese: トライアングルアタック Triangle Attack) is a recurring special attack introduced in Fire Emblem: Shadow Dragon & the Blade of Light, in which groups of three related units can work together to unleash a single powerful blow on an enemy, achieved by surrounding their target in a triangular formation. The attack is primarily associated with characters of the Pegasus Knight class and its advanced forms, but members of other classes have been able to perform it in certain games. 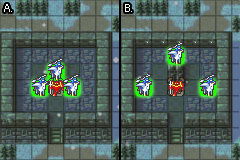 The Triangle Attack is activated with two simple steps. Two of the members of the trio must wait next to the chosen target (or both be next to them already when their phase begins), then the third member of the trio must move to complete the formation and attack the target. The activation of a Triangle Attack is usually heralded by the initiating unit announcing the impending Triangle Attack, and in all appearances except the Tellius and DS games, the Attack itself usually features a special animation depicting all three participants striking the target.

In all of its appearances prior to Echoes: Shadows of Valentia (excluding Gaiden), the successful activation of a Triangle Attack guarantees that the initiating unit will deal a critical hit to the enemy. The power of the Triangle Attack is determined solely by the initiating unit's attack power, with no influence from its partners. It does not otherwise boost the stats of any of the participating units or, if the units are too weak to actually normally deal damage to their target, allow them to avoid dealing zero damage; however, this is rarely a concern.

There are two possible formations in which Triangle Attacks can be performed. The formations (pictured to the right) can be rotated in any direction and will still work, and can be activated from any of the three sides, but otherwise need to be exactly matched.

In Shadow Dragon and New Mystery of the Emblem, any and all of the participants in a Triangle Attack can be reclassed, and none of them are required to be in their original class in order to activate it, nor do they have to use the same weapon type.

In its appearance in Shadows of Valentia, the Triangle Attack is a combat art which Palla, Catria, and Est each possess. As with all other combat arts, it must be activated on command when the three participants are in formation (Formation A only; Formation B does not work), costing 10 of the initiator's hit points to activate. It is significantly less powerful than in prior games, only boosting the user's critical rate instead of guaranteeing a critical hit. It also increases the initiator's attack power and hit rate for the duration of the attack, but like most combat arts, it is impossible to follow-up attack with it.

The combat art iteration of the Triangle Attack returns in Three Houses, where it can be learned by any female unit by mastering the Pegasus Knight class.

The Triangle Attack is a recurring skill in Fire Emblem Cipher, introduced in the first series. It is classified as a Formation Skill (

), and in order to use it all three members of the Triangle Attack trio must be deployed and must not have made any moves in the current turn yet. To use the Triangle Attack, the player taps all three members to expend their turn, which gives the attacker a signficant boost to their attack power for their next attack and has an additional effect which hinders the opposing player.

Currently, nine cards have a Triangle Attack as a skill:

Although it is not called "Triangle Attack", Barst (B01-021HN The Hatchet) has a similar Formation Skill, "Bordcordbarst", which requires Bord and Cord to be in play and has a similar effect. Unlike Triangle Attack, only Barst has this skill and can activate it.

Emma (B04-099HN A Dark Flier, Every Once in a While) has the skill "Triangle Attack?" which spoofs a regular Cipher Triangle Attack. If the player has two spare Emma cards in their hand, they may reveal them to give Emma a +20 attack boost for the rest of the turn. This skill can only be used once per turn.