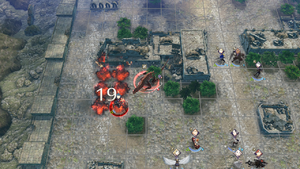 An Experimental Demonic Beast unleashing its Staggering Blow, Flame Breath, on an area.

Staggering Blows (Japanese: 猛撃 Ferocious Blow) are a special kind of attack introduced in Fire Emblem: Three Houses. They are powerful area-of-effect attacks that are exclusively used by enemy monster units. These attacks are very large and typically have high raw might, though they are offset by the fact that a monster must prepare to use them beforehand. On top of their high power and wide range, they also typically have other secondary effects, ranging from debuffs to changing the terrain briefly.

Staggering Blows are almost entirely physical attacks which use the user's strength and target the foe's defense stat. The most notable exceptions are Rapids and Gale, which are magical attacks used by only a few unique monsters. All Staggering Blows have an area of effect—usually spreading out from the space in front of the monster—and can damage multiple units at once. They are not limited to damaging player units; if there are other units of the same affiliation as the user within range of a Staggering Blow, they will be affected by them as well. 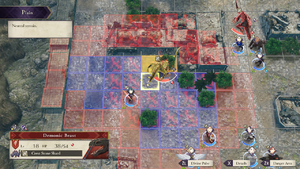 A monster preparing to use its Staggering Blow. The wavy red patterns denote which spaces will be targeted, depending on which direction the monster is facing.