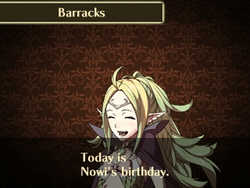 Nowi's birthday occurring in the barracks.

In the vast majority of Fire Emblem games character birthdays are generally unknown, though some important characters will have a birth year that can be figured out from official timelines or other media. The games' entire cast having fully defined birthdays in their profiles is a fairly recent development within the series. Currently only four main series games and one spin-off have defined birthdays for its playable cast. 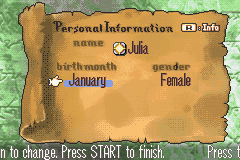 In Elibe a character's birth month is thought to determine some personality traits, similar to the concept of astrology.[1]

The player chooses Robin's birthday when starting a new game. When the player enters the barracks on this day, the random character on the 3DS's lower screen will have a special message, wishing Robin a happy birthday with an amused expression. Characters who are children of or married to Robin will also have unique lines. On the bottom screen, Robin's spouse will no longer appear more often than other characters, as opposed to normal days. Should Robin share their birthday with another character, the bottom screen will show both characters at the same time, and two red events will be generated, with Robin's taking place first.

Excluding Robin, exactly four characters celebrate their birthday each month. Old Hubba's birthday is stated in his unused roster description, but this has no effect on gameplay.

Characters' birthdays are listed as the last line of their bio on the roster, which can be accessed by visiting the library in the Records Hall. Some of the characters' birthdays represent special dates. The player chooses Corrin's birthday when starting a new game.

If the system's clock matches one of the character's birthdays, a birthday cake icon appears above their head in My Castle. If Corrin talks to them, that character gets a burst of weapon experience, finds a preset item, and gains a surge in Speed and Luck. After that, they will ask for an accessory and thank the player for remembering their birthday if they agree to give one, regardless of whether or not the gift is a favored accessory.

The item the character finds is based on the route and chapter progression. They are as followed:[2]

Byleth's birthday (and by extension Sothis's birthday) is chosen by the player at the beginning of the game.

On a character's birthday, the player has the choice to send flowers (which costs 200 gold), have a tea party with the character (if unlocked), or do nothing at all. On Byleth's birthday in Part 1, the player receives a letter from the chosen house's leader (Edelgard, Dimitri, or Claude) which contains an item (the Black Eagle Pendant, Blue Lion Brooch, or Golden Deer Bracelet, respectively). If the player's birthday occurs before choosing a house to lead, or after siding against Edelgard in Chapter 11 on the Black Eagles route, the player will receive a White Dragon Scarf from Rhea. In Part 2, Byleth will receive a second letter, with no item unless it was not received due to Byleth's birthday not occurring in Part 1 depending on the chosen birth date. Whom this letter is from depends on the chosen route: Edelgard for Crimson Flower, Claude for Verdant Wind, or Flayn for Silver Snow; in Azure Moon, the letter will be from Gilbert from the 1st of the Guardian Moon (Chapter 14) to the 31st of the Lone Moon (Chapter 16), and from Dimitri from the 1st of the Great Tree Moon (Chapter 17) until the end of the Azure Moon route.

The player chooses Alear's birthday when starting a new game.

Most important characters in Tokyo Mirage Sessons have birthdays in their profiles, although there are no gameplay bonuses associated with them.

With the exception of Tiki, all the listed characters share their birthday with their respective voice actor.