Rhea (pronounced /⁠'ɹeɪə⁠/[key]; Japanese: レア Rhea) is a character appearing in Fire Emblem: Three Houses. She is the archbishop of the Church of Seiros, and has served in this role since Jeralt's days as a knight. Her true identity is Seiros (pronounced /⁠'sɛɹoʊs⁠/[key]; Japanese: セイロス Seiros), the slayer of Nemesis in Imperial Year 91, revered as a saint in the Church of Seiros.

Rhea, born Seiros, was one of the last Children of the Goddess born from Sothis's own blood, and lived among her kin at Zanado in ancient Fódlan. Nemesis—the "King of Liberation", who had stolen Sothis's remains and used them to acquire the Crest of Flames and forge the Sword of the Creator—invaded Zanado with an army to harvest the bodies of goddess's children for power; save Seiros, all of the Children of the Goddess at Zanado were killed. Seeking revenge, she founded the Church of Seiros,[2] and helped Wilhelm Paul Hresvelg establish the Adrestian Empire; Seiros recruited fellow Children of the Goddess Cethleann, Cichol, Indech, and Macuil to form the Four Saints, and they gifted their blood to Wilhelm's allies—whose families would become the Adrestian nobility—amassing enough soldiers to battle Nemesis.[3] War began between Seiros's and Nemesis's forces in Imperial year 46, starting with a battle at Gronder Field that the Adrestian Empire won.[4] During this time, Seiros pushed the narrative that she was a prophet sent from the Goddess Sothis[5] and the Crests and Heroes' Relics were divine blessings gifted to Nemesis and his allies to defeat evil before they became corrupted,[6][7] intending to hide the origin of the powers Nemesis's allies—and now Wilhelm and the Adrestia's elite—obtained,[8] and to persuade her human allies to wage war against them given their good reputation,[9] with only Wilhelm being aware of the deception.[10] During the war, Seiros assumed her draconic form many times in the Empire's support, which she framed in such a way it was seen as a separate entity also sent by the Goddess herself, which came to be known as the Immaculate One.[11][12] In a battle at the Tailtean Plains, Seiros killed Nemesis in the year 91[13] and retrieved her mother's bones, while in the next 7 years she ensured the 10 Elites were hunted down, their Heroes' Relics were seized, and their clans were assimilated into the Empire.[14] Given Nemesis's resources and knowledge about Crests and Sothis's children, Seiros suspected he had received external help and raised an investigation to uncover his collaborator's identity, which ultimately led nowhere.[15] After the war, Seiros had the bones and Crest Stones of her fallen kin concealed in the Holy Tomb.[16]

Over the course of the next millennium, Seiros attempted to bring back Sothis to life. During Garreg Mach's construction, she recruited the Four Apostles, mythical individuals bearing four rare Crests. In Imperial year 185, Rhea had the Four Apostles pour their blood into the Chalice of Beginnings in an undisclosed location along with Sothis's remains, hoping the experiment would resurrect her.[17] The result of the ceremony was an Umbral Beast[18] which quickly began to rampage, forcing Seiros to put it down; The Four Saints later disbanded. After recovering the Sword of the Creator, Seiros faked her death, assumed the alias of "Rhea" and had her supposed corpse—in reality, the Sword of the Creator but without Sothis's Crest stone—buried and sealed in the Holy Mausoleum. From this point onwards, Rhea began crafting human vessels and planting Sothis's Crest stone within their bodies before giving them life, hoping one of them would inherit her consciousness, though none were successful;[19] during this time, she also interfered any human attempts to uncover the truth behind the Heroes' Relics,[20] and halted Fódlan's technological and medical progress.[21][22]

By Imperial year 1159, Rhea had publicly become the Archbishop of the Church of Seiros once more. Her twelfth failed vessel, Sitri, fell in love with the captain of the Knights of Seiros, Jeralt—whom Rhead had previously saved through a blood transfusion that gave him her Crest[23][24]—and had a child named Byleth. However, the child was stillborn, and Rhea, at Sitri's request, transferred Sothis's Crest Stone to Byleth and saved them at the cost of Sitri's life.[25] Byleth was unnaturally silent and had no heartbeat, leading the terrified Jeralt to fake the child's death and flee Garreg Mach Monastery with them.[26]

In 1175, Rhea took on Shamir, a mercenary and survivor of the Dagda and Brigid War, who in turn became one of her Knights of Seiros as a way to repay her debt.[27] In 1176, Rhea provided asylum to Cassandra, a previous Officers Academy alumni, who became a criminal in the Kingdom of Faerghus due to a being falsely accused for plotting to kill King Lambert.[28] Moved by the archbishop's gesture, Cassandra assumed the name "Catherine" and became a Knights of Seiros, pledging her loyalty to Rhea.[28]

In 1180, Jeralt and Byleth are caught up in an attack on Officers Academy students Edelgard, Dimitri, and Claude, leading the amnesiac Sothis to awaken within Byleth's soul. Jeralt returns to Garreg Mach, where Rhea reinstates Jeralt as a Knight of Seiros and gives Byleth a teaching position at the Academy in the hopes that Sothis can be resurrected through Byleth's body.[29] Over the course of the next year, Rhea oversees the education of the students of the Officers Academy and assigns missions to Byleth and the other professors. Eventually, Jeralt is murdered by an assassin and Byleth is drawn into a trap in an attempt to avenge him. Byleth fuses with Sothis and gains all of her powers, leading Rhea to believe her long struggle has finally succeeded. She takes them to the Holy Tomb beneath the monastery in the hopes of having them commune with Sothis, but Edelgard attacks the tomb with her soldiers. Byleth defeats her, but Edelgard escapes, accuses the Church of being corrupt and stagnating humanity, and declares war on the Church. Byleth can either remain loyal to the Church or defect to the Empire; in either case, Edelgard attacks Garreg Mach. Rhea leads Church forces in battle, but is defeated.

On all routes other than Crimson Flower, where Byleth remains loyal to the Church, Rhea is captured by Imperial forces after the battle and imprisoned in the Imperial capital Enbarr for the next five years so that Edelgard can use her as insurance against those who slither in the dark.[30] After Byleth awakens from a coma, rallies an army, and kills Edelgard, they rescue Rhea. On the Azure Moon route, she passes the title of Archbishop on to Byleth and peacefully retires to Zanado. On the Silver Snow and Verdant Wind routes, Edelgard's vassal Hubert reveals the existence of the true threat to Fódlan, a cult known as those who slither in the dark, and directs Byleth to their stronghold at Shambhala. Rhea recounts some of her personal history to Byleth and accompanies them to Shambhala, where she transforms into the Immaculate One in order to protect Byleth from those who slither in the dark's javelins of light. Severely injured, Rhea is returned to Garreg Mach Monastery. On the Silver Snow route, she recounts her experiments to resurrect Sothis, but suddenly suffers from draconic degeneration, transforms into the Immaculate One, and goes berserk; Byleth is forced to defeat her. If Rhea and Byleth did not unlock their A support, Rhea dies in Byleth's arms; while if they did unlock their A support, she barely survives and manages to make a full recovery. On the Verdant Wind route, when those who slither in the dark resurrect Nemesis in a final attack on Fódlan, Rhea recounts the rest of her history to Byleth. She is not seen afterwards, and presumably succumbs to her wounds and dies offscreen.

On the Crimson Flower route, where Byleth defects to the Empire, their betrayal causes Rhea to suffer a total psychotic breakdown. After the Battle of Garreg Mach, Rhea retreats to the Faerghus capital of Fhirdiad, and Dimitri ascends the throne and allies with her. Rhea spends the next five years in a stalemate with the Empire, until Byleth awakens from their coma and tips the war in Adrestia's favor. Rhea leads Church forces in an attack on the monastery, but despite killing Adrestian commanders Randolph and Ladislava, is defeated and forced to retreat. Retaking the name Seiros, she and Dimitri confront the Imperial army at the Tailtean Plains, but Dimitri is killed and Seiros is again driven off. Seiros returns to Fhirdiad, takes control of the Kingdom, orders Fhirdiad burned to the ground, and transforms into the Immaculate One; she faces Edelgard and Byleth in battle at Fhirdiad, but is slain.

Rhea is an NPC for one paralogue and Chapter 12 on all routes other than Crimson Flower. She is the primary antagonist and a recurring boss on the Crimson Flower route and the final boss of both Crimson Flower and Silver Snow.

This character has a total of three variations in Heroes, two as Rhea and one as Seiros; all are based on their Three Houses incarnations. Only Seiros currently has a normal variation available, Rhea only has special variations available.

Seiros and both playable variants of Rhea use the Immaculate One as their dragon transformation.

Rhea: Witch of Creation is only available at 5★ rarity.

Rhea: Immaculate One is only available at 5★ rarity.

Seiros: Saint of Legend is only available at 5★ rarity.

Rhea connects with people like a calm, affectionate mother, yet dispenses strict judgement on opponents of the Church.

Rhea can only be S-Supported with Byleth on the Silver Snow route; otherwise she has no ending.

Byleth, Wandering Flame & Rhea
After finally saving both Fódlan and Rhea from crisis, Byleth ascended the throne as the first leader of the United Kingdom of Fódlan. From his/her temporary residence at Garreg Mach Monastery, he endeavored to restore and develop Fódlan. Having narrowly escaped death, Rhea took time to recover her strength before returning to her role as archbishop. Upon her return, she applied herself to rehabilitating the church and helping those who had suffered because of the war. Thereafter, the two worked closely to forge new policies and achieve progress for Fódlan. The pair's collective work came to be thought of as nothing short of miraculous.

Rhea makes a cameo appearance in Super Smash Bros. Ultimate at Garreg Mach Monastery, alongside Seteth and Flayn when the stage changes to the cathedral. Rhea additionally appears as an Ace neutral-type spirit using her artwork from Fire Emblem: Three Houses. When equipped to an AI character, Rhea grants the giant status. When equipped to a player character, she grants increased magic attack power.

Rhea is featured on three cards in Fire Emblem Cipher: one as Rhea, one as The Immaculate One, and one as Seiros. 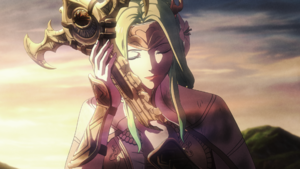 Seiros shown without blood coating the sword and her hands.