"Unit" (Japanese: ユニット unit) is the term used to describe a character present in the gameplay of the Fire Emblem series. Units exist on the game's maps and participate in the battles fought in each map, and are divided into between two and four kinds: units controlled by the player, enemy units, and autonomous neutral/allied units. 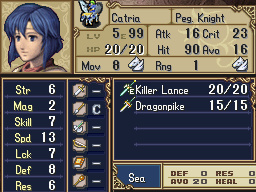 All units are comprised of a set of identifying data determining its abilities and restrictions in gameplay. Each unit possesses a class to which they belong, a more general identifier determining their available weapon types, potential maximum stats, movement capabilities, and general battlefield utility. On a more individual basis, each unit also possesses a personal set of combat data specific to them: their level and current experience, current stats, inventory, weapon levels and, for player and/or potentially recruitable units, growth rates. Some games give units other gameplay abilities and data, such as skills, affinity, biorhythm, supports, Holy Blood, and Crests.

Most of this data can be viewed by pressing the game's "help" button when the cursor is hovering over the desired unit; this brings up a display arranging and summarising this data, as demonstrated to the right with Catria in Shadow Dragon. Some of this data, like growth rates, is hidden to the player and can only be determined by examining the game's code (or by referring to resources which have already done so and listed the results, like guide books, Serenes Forest or this wiki).

A unit's affiliation or type determines which army it is part of, and by extension in which phase it moves. A unit's affiliation is identified by its color on the map or, in Path of Radiance, Radiant Dawn, and Three Houses, the color of its HP bar and a circle beneath the unit. Additionally, titles from Shadow Dragon to Echoes: Shadows of Valentia mirror the map sprites of enemy units.

Affiliation is also a term used for a sub-category of the above. These affiliations are given specific names. In some games, this type of affiliation is purely cosmetic, while in others, it affects which units are granted authority bonuses in others. In Genealogy of the Holy War, each affiliation gets its own phase. 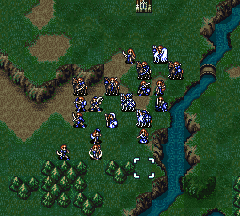 Player units in Genealogy of the Holy War

Identified by the color blue, "player" units are units directly under the control of the player. These units comprise the player's armies, and the point of the game is to use them to combat enemy units and complete the objectives of maps. In most games, only a small fraction of player units currently comprising the player's army can be deployed on the map, usually no more than twenty at a time; similarly, whereas the enemy armies are typically comprised of a vast number of enemy units, the number of total accessible player units is comparatively small, never larger than seventy per game. 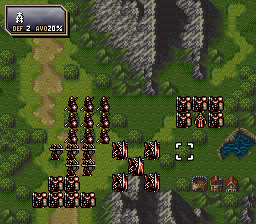 Colored red, enemy units, known as computer units in Shadow Dragon & the Blade of Light, comprise the enemy army and the game's primary obstacle and challenge. These units are directly antagonistic and will actively attack all other unit types. The player will almost always be required to defeat enemy units; the rout objective requires that all enemies be defeated to complete the chapter.

Among enemy units, there will almost always be a boss unit. Bosses are the commanders of the enemy forces, stronger than the other enemies on the map; their defeat is a common map objective. Additionally, sometimes among enemy forces there are certain units who can be recruited to join the player's army; in games which feature a hard mode, these units may receive a "hard mode bonus", where their base stats are higher than usual owing to the generally inflated base stats of enemies in higher difficulty modes. 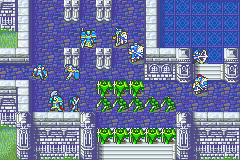 Neutral units in The Blazing Blade

An "NPC" (non-player character), "neutral", "other", or "ally" unit, colored green (except in Gaiden and Genealogy of the Holy War, where they are blue and yellow, respectively), is a usually benevolent unit not affiliated with the player. They cannot be controlled or manipulated, but they can normally be healed or rescued by player units. Enemy units can and usually will attempt to attack NPC units as they would player units.

NPC units usually come in one of several varieties and purposes. They may be weaker or combat-incapable units, where protecting them from harm is the goal of the chapter. Some potentially recruitable units will initially appear on maps as NPCs, often capable of holding their own in battle until recruited. Occasionally, NPC units may comprise an allied army fighting alongside the player's units, typically in a defense map. On some occasions, when recruitable enemy units are surrounded by a number of subordinate enemies, its subordinates will become NPCs when their leader is recruited. In Genealogy of the Holy War, the most typical use of an NPC unit is to block the passage of both the player and enemies toward neutral castles until the game is ready for the player to travel to them. In Thracia 776, on some maps, NPC units act as enemy units, while on other maps they take their usual role.

In Three Houses only, NPC units are incapable of killing boss enemy units; any attacks made by an NPC unit that would normally kill the boss unit will instead leave the latter with 1 HP.

NPC units act after enemy units and are the last army to act before the turn is over.

The least frequently appearing unit type, partner units, called ally units in North American versions of Radiant Dawn and friend units in some menus of Path of Radiance and Radiant Dawn, (colored yellow, except in Genealogy of the Holy War, where they are green) are a variant of NPC units. Their purpose is to directly assist the player's army in fighting enemies, doing so on their own. Partner units cannot be directly controlled by the player; in Path of Radiance and Radiant Dawn, however, they can be given a set of general instructions using the Direct command, which gives the partner army a general objective to accomplish like attacking enemies or travelling to a specific space on the map.

Note that "third army" (Japanese: 三軍) is sometimes used in the Japanese versions of older titles and related material to refer to NPC units.