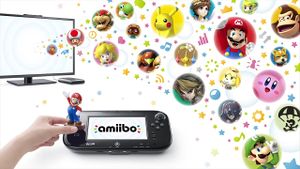 amiibo is a series of interactive figurines created by Nintendo which is designed to work with various games for the Wii U, Nintendo 3DS, and Nintendo Switch consoles. amiibo work through near field communication (NFC), and are scanned by the consoles when running compatible games to use that amiibo's data to access various types of content that may require specific figurines.

Uses for the Fire Emblem amiibo

Super Smash Bros. for Nintendo 3DS and Wii U was the first set of titles to be compatible with amiibo, with the first amiibo released being themed after it, and a wide range of amiibo are compatible with it, including amiibo of all six Fire Emblem playable characters. The games use amiibo to create personalized AI characters, dubbed "Figure Players", to participate in battles in the game. When first scanned, the player can name the amiibo and assign it a specific alternate costume and a set of special moves, then they can take the Figure Player into matches with them. Unlike other AIs in the game, Figure Players are "trainable" and are assigned a level which increases as they gain experience through fighting, reaching a maximum of level 50.

Super Smash Bros. Ultimate adds compatibility for the Chrom and Byleth amiibo, and amiibo that have data for Super Smash Bros. for Nintendo 3DS and Wii U can have some of their data carried over in a one time transfer. Afterwards, the amiibo cannot be used in the Wii U and 3DS games without deleting the data for Ultimate.

Code Name: S.T.E.A.M. is compatible with the Fire Emblem amiibo on a read-only basis. When Marth, Ike, Robin or Lucina's amiibo is scanned, the character joins the player's party and can be deployed in battles, coming with their own unique equipment and skills. Unlike an ordinary character, the Fire Emblem characters cannot be revived at checkpoints mid-battle should they be killed, and instead they must be scanned again after the battle to rejoin the party.[1] If all four Fire Emblem amiibo characters are deployed, the usual background music will be replaced with special Fire Emblem-related tracks.

Fire Emblem Fates is compatible with the Fire Emblem amiibo on a read-only basis. When Marth, Ike, Robin, or Lucina's amiibo is scanned, it introduces the relevant character into the game as a powerful bonus unit who appears in the player's My Castle. The player can then challenge the character to a battle, and if they win, the character will join their army.[2][3] If the character is randomly chosen to manage the Armory, then replica versions of their signature weapons will be put on sale.

Yoshi's Woolly World is compatible with every amiibo on a read-only basis. Scanning certain amiibo will unlock a wearable pattern for Yoshi based on that character; patterns based on Marth, Ike, Lucina and Robin are available.

While the Roy and Corrin amiibo are compatible with both versions of the game, they only give a special costume for Yoshi in the 3DS port, and will give out a generic costume in the Wii U version (which is what the other Fire Emblem character amiibo will give in both versions).

Super Mario Maker is compatible with numerous amiibo on a read-only basis. When a compatible amiibo is scanned, the player can add them to a map they have designed in the form of a Mystery Mushroom power-up, which transforms Mario into an 8-bit version of that character. The amiibo of Marth, Ike, Robin, and Lucina are compatible. In keeping with the 8-bit theme, all four of these costumes use sound effects from Fire Emblem: Shadow Dragon & the Blade of Light.

In Kirby: Planet Robobot, Kirby can inhale amiibo which are scanned, giving him copy abilities relating to the character. The Marth, Ike, Lucina, and Roy amiibo give Kirby the Sword ability, while Robin gives him the Spark ability. Other Fire Emblem character amiibo give him a random ability.

In Style Savvy: Fashion Forward, the player can scan a Lucina amiibo[4] to summon a special customer to their boutique. This character will relate a tale similar to that of Lucina's time in her "Marth" disguise, and ask the player to design an outfit to match their skirt, which is based on a part of Lucina's outfit. If the player successfully designs an outfit to this character's liking, they will be rewarded with a copy of the Warrior Skirt to use in their own outfits.

Fire Emblem Echoes: Shadows of Valentia utilizes Smash Bros. amiibo to summon Illusory Heroes (if a Fire Emblem character) or generic ghostly versions of classes (if another character) to aid the player for a single turn.

The Alm and Celica amiibo have three functions:

Fire Emblem: Three Houses is compatible with any amiibo on a read-only basis through the amiibo Gazebo at the Garreg Mach Monastery. When one of these amiibo is scanned, a variety of items will spawn around the gazebo, which refresh every week.

Scanning any Fire Emblem character amiibo will unlock an exclusive music track to play during auxiliary battles and also unlock a unique area, the Holy Tomb, which can be accessed during New Game +.

Fire Emblem Warriors is compatible with any amiibo on a read-only basis through the amiibo Present feature. When one of these amiibo is scanned, random materials, low-quality weapons, or gold are given.

Scanning Chrom or Tiki's amiibos for the first time will unlock the exclusive Chrom's Training Sword and Tiki's Tear weapons. From the second scan onwards, they follow the behavior described above for Fire Emblem character amiibos of playable characters.

Fire Emblem Warriors: Three Hopes is compatible with any amiibo on a read-only basis through the amiibo Present feature. When one of these amiibo is scanned, random materials, low-quality weapons, or gold are given.