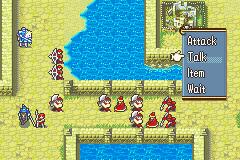 Talk (Japanese: 話す Talk) is a specialised command that allows two units to speak with each other for various purposes. The talk command has appeared in every game in the Fire Emblem series, with the only exception being Fire Emblem Gaiden, which lacks talk as a command entirely. However, in Gaiden characters can still be spoken to, they simply need to be walked up to.

The requirements for making the command appear vary on a case by case basis. In many cases, simply placing compatible units next to each other and using the command are all that is required.

Generally the most difficult requirement is figuring out who should actually talk to whom. Often, the main Lord character will suffice, but if the Lord character cannot talk, hints are usually provided in the dialogue scenes before or during battle.

For example, Marisa in Fire Emblem: The Sacred Stones can only be recruited by talking to her with either Gerik or Ewan, not with either Ephraim or Eirika. Her recruitment requirements are hinted several times before and during the chapter. Gerik mentions her by name[1] before she appears, after Marisa appears, an enemy soldier specifically mentions that she is a member of Gerik's mercenaries,[2] hopefully leading the player to the conclusion that Gerik should talk to Marisa.

Of particular note is that both enemies and NPCs have access to the Talk command, though uses of it are uncommon; a notable exception is Clarine's recruitment in Fire Emblem: The Binding Blade, where she will only join Roy's army if she talks to him on the Other Phase instead of the Player Phase.

In some games,[which?] units cannot talk if either unit is silenced.

In Awakening and Fates, units within the same Pair Up formation can talk to each other, though instances of this occurrence are nearly exclusive to each game's Downloadable Content.

Uses of the talk command

Under most circumstances, and most famously, Talk is used in order to recruit characters into the player's army regardless of their previous allegiance, thus bolstering their current reserves of units.

There are instances where the talk command is simply used for supplementary dialogue as well. Fire Emblem: The Blazing Blade, Fire Emblem: Genealogy of the Holy War, and Fire Emblem: Shadow Dragon are the games that makes the most use of this. The Blazing Blade's Final Chapter has several talk conversations between Lyn, Eliwood, and Hector that feature them commenting on recent events to no real benefit of the player aside from more character interactions. Genealogy's supplemental conversations frequently have tangible bonuses, and some of them can be likened to a prototypical version of the modern Support conversation system. Genealogy's conversations can boost a characters Love points, grant permanent stat boosts, and give units rare items. In Shadow Dragon, some conversations (such as the one between Xane and Tiki) are akin to support conversations in other games, while others are newly recruited units talking with Marth.

There are also instances when talking does not recruit the character directly into the army. In Fire Emblem: The Blazing Blade, Jaffar, who starts as an ally unit in chapter 26E/28H, can be talk to with Nino. He will still be an ally unit, but will join you at the end of the chapter.

In rare circumstances, talking can actually have negative effects on the game. Jill in Fire Emblem: Path of Radiance, for instance, will choose to defect from the Greil Mercenaries in order to fight alongside her father Shiharam, provided she does not have an A support with Mist or a B support with Lethe. Another example can be seen in Chapter 27/29: Cog of Destiny in Fire Emblem: The Blazing Blade, where Nino can speak with either Linus or Lloyd, the chapter bosses, in an attempt to get them to lower their arms to no success. After Nino speaks to one of her brothers, they cease being stationary and will actually move from their throne tile to attack other units.

Methods to find who can talk to whom

In most games, the only ways for the player to figure out who can talk to who are from context clues, as mentioned above. 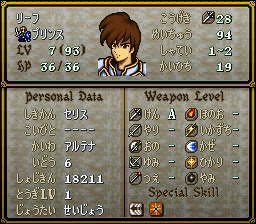 But, some games, like Fire Emblem: Genealogy of the Holy War, Fire Emblem Awakening, and Fire Emblem Fates feature UI elements to make determining talk partners easier for the player.

In Radiant Dawn, this is shown on the unit select menu of the preparation screen.

In games from Shadow Dragon onward, if the unit that can be talked to is in the movement range of the initiator, the space that unit is on will be highlighted in yellow. This yellow highlight is shown for all conversations, be they recruitment conversations or supplementary conversations. 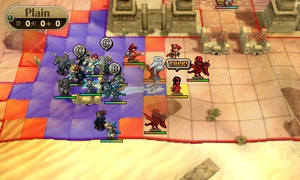 Chrom can talk to Tharja, indicated by the word "Talk!"