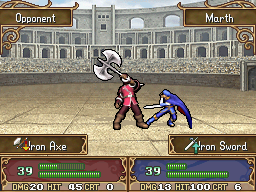 Marth fighting an enemy Warrior in an arena match in Shadow Dragon.

Arenas (Japanese: 闘技場 Arena), referred to as colosseums in The Sacred Stones' Sound Room, are a recurring gameplay element introduced in Fire Emblem: Shadow Dragon & the Blade of Light and present in the majority of games since. In an arena, the player's units can gamble their own money to challenge foes with the hope of, by winning, gaining more experience and gold, but in taking this challenge the unit's lives are at risk of death. They are also a type of terrain.

Arenas are not present at all in Fire Emblem Gaiden, its remake Echoes: Shadows of Valentia, Path of Radiance, Radiant Dawn, or Awakening, although the latter does have a specific arena as the setting of one chapter. 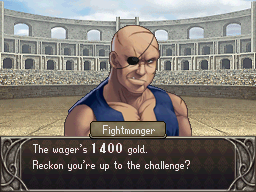 The arena's host inviting a unit to participate in Shadow Dragon.

While the mechanics of the arena have changed throughout the series, its overall function has remained the same: at a small cost of gold, one of the player's units may enter the arena to take part in a standard battle, in hopes of netting a profit from the victory, as well as experience. Units that cannot attack, such as Clerics or Bards cannot take part in the arena, nor can units who do not have any weapons to equip. Unusually, manaketes cannot enter arenas under any circumstances, though they can spawn as enemy units in Shadow Dragon & the Blade of Light.

A battle in the arena is similar to standard fights on the map. One battle is performed within the arena, wherein the first unit to attack is determined by the combatant's attack speed. Should this one round be insufficient to determine a winner, and it often is, another battle is performed, and the cycle continues until one combatant is defeated. Between battles, the player can yield by pressing the B button during this pause if they feel that their unit stands no hope of surviving; doing so, however, causes the player to lose whatever gold they placed as their bet. Fleeing battles is not an option in Fire Emblem: Shadow Dragon & the Blade of Light.

While effectively acting as a method to "buy" experience points, use of the arena to raise units can be a risky strategy. Enemy units within the arena can be absurdly overpowered, with their stats "scaling" alongside the unit that enters; particularly powerful units in the player's army can end up fighting enemies that not only wield powerful weaponry, but those that break standard class stat caps. In most of the games, characters defeated in the arena are killed.

Arenas made their debut in Shadow Dragon & the Blade of Light, acting as a risky method to raising units in the game. Unlike the various arenas found in later games, the arenas here allowed the player to bet various wagers before entering the fray, with higher bets resulting in higher payouts, but also more powerful enemies. Unlike later games in the series, the player cannot yield. 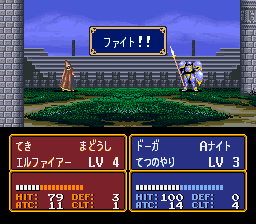 Draug in an arena match in Mystery of the Emblem.

Arenas were completely revamped for Genealogy of the Holy War, due to the game's radically different design from the previous games in the series. Instead of being a designated tile on the map, the arena must be accessed from a castle; furthermore, units do not die if they are defeated in the arena, and they instead respawn outside of the castle with only 1 hit point left.

Instead of allowing for unlimited uses like in other games, each chapter offers a maximum of seven pre-determined enemies to defeat per battle, gradually increasing in difficulty. Every battle-capable unit can attempt the arena as many times as they like until they have defeated all seven foes. Assuming a unit can survive all seven battles, they can win a total of 17500 gold per chapter; unlike in other games, no initial wager has to be made to participate. A unit's progress in the chapter's arena is marked as an "Arena Level" stat in their profiles, which is reset at the end of each chapter.

Due to Thracia 776 returning to the gameplay seen in the first three games of the series, the arenas within the game are more similar to those seen in Mystery of the Emblem. The ability to flee from battles and to set one's bet were carried over, as was the possibility of characters dying in the arena.

As to take advantage of some of the game's new additions, the arena could be influenced by outside factors, such as from supports, and authority bonuses or the Charm skill. As a drawback, however, the arena also increases the unit's fatigue levels, and as such players cannot easily abuse the arena to raise their units, lest they become unavailable for the next chapter. 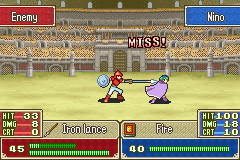 Nino in an arena match in The Blazing Blade.

The Binding Blade, The Blazing Blade and The Sacred Stones for the most part retain an arena system similar to that of Thracia 776. Once again, a unit's support effects are carried into the arena battles, allowing one to enter the arena with a boost to their stats. Additionally, Nils and Ninian's ring dances in The Blazing Blade offer the ability to abuse the arena via the use of a glitch.

In The Sacred Stones, while usable during the course of normal chapters, arenas are completely inaccessible during skirmishes that take place on the world map. As a result, once a chapter with an arena has been completed, it can never be accessed again. They also cannot be accessed from any sort of menu, unlike shops or armories.

While not imperative to gameplay, the overuse of arenas can be detrimental to the player's final tactics ranking in The Binding Blade and The Blazing Blade; as more turns are used for using the arena, the number of turns used per map increases, lowering the rating.

A rare glitch exclusive to The Binding Blade can cause the arena to spawn Brigands wielding an Iron Bow or Warriors with a Fire tome. In these circumstances, damage will be inflicted to one or both of the combatants, and the battle abruptly ends; no reward is dispensed if this occurs. This was fixed in both subsequent games.

All three Game Boy Advance games also feature the Link Arena, a multiplayer mode based loosely on the gameplay of the traditional arenas.

Fire Emblem: Shadow Dragon and New Mystery of the Emblem 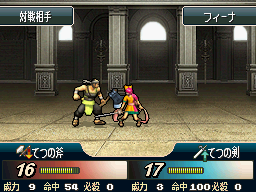 Phina in a Training Grounds session in New Mystery of the Emblem.

Being remakes of the first and third games in the series, the remakes of Shadow Dragon and New Mystery of the Emblem: Heroes of Light and Shadow feature an arena system more similar to their original source material.

Unique to these two games is the ability to use the arena multiple times in the same turn; upon completion of one battle in the arena, the player can choose whether or not to allow their unit to take place in another battle, with the outcome featuring even more experience and monetary gain. This strategy, however, is of extreme risk, due to the unit not being healed between battles.

Furthermore, arena battles are capped at 6 rounds of combat. If both combatants are alive by the end of 6 rounds of combat, a draw will be declared, the wager will not be charged and the combatant will be ejected from the arena with any damage they have sustained.

New Mystery of the Emblem also features a variant of arena battles as a standard preparations menu feature, as the Training Grounds, styled as a training area. While otherwise functionally identical to arenas, the Training Grounds do not give any cash reward and instead the initial bet is a fee paid to use them for training.

A variation of the Training Grounds feature is used in Fire Emblem Warriors, though this version is a simple menu used to level-up characters for a fee without any of the arena-style gameplay.

Arenas return in Fates after being absent from Awakening, though their role is now as a facility in the larger My Castle feature. As with previous games, a unit enters the arena and engages in combat to win a prize and experience. Gold and experience are not won in the Fates arena; instead, resources are bet, and another of the same resource is rewarded when the battle is won. In this arena, Quiet Burn and its Roar variation always play, regardless of castle settings.

The Training Grounds return from Fire Emblem: New Mystery of the Emblem, although these Training Grounds have different mechanics. Every month there is a tournament focusing on a specific weapon that has a gold and item reward for winning every round; it can be entered for free, and lesser amounts of gold are gained after each enemy defeated. The player unit can heal up to two times peer tournament between rounds using the X button. There is no risk of death, and pressing B simply skips to the results of the round instead of yielding. The player can quit between rounds with the B button.

It can be entered again after already getting the reward, but subsequent victories in the same month only give the gold reward, and not the item reward.

In Fire Emblem Heroes the Arena serves as the game's competitive mode. In this mode players assemble teams and fight other player's teams to earn points for victories. Players may also set up defense teams which also reward points when they defeat challengers.

The Coliseum in Super Smash Bros. for Wii U.

Super Smash Bros. for Wii U features an exclusive stage based on the arenas, called the Coliseum (Japanese: 闘技場 Arena). Like the Castle Siege stage from Super Smash Bros. Brawl, it is a generic pastiche of arenas from across the series and does not specifically reference any single game. A set of gear-driven mechanisms underneath the stage regularly raise and lower portions of the floor to create platforms and adjust the surface level of the stage. One of the tracks that plays here is a medley of the arena battle music from Genealogy of the Holy War and The Binding Blade. The stage later returns returns in Super Smash Bros. Ultimate.