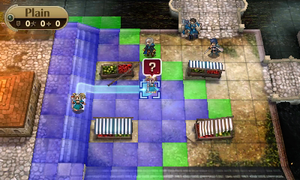 Lissa is about to step on an event tile; when moving a unit over an event tile, a question mark appears above them.

Event tiles are a gameplay mechanic first appearing in Fire Emblem Awakening. In Awakening, event tiles appear in the majority of the game's battle maps, and give random benefits to units that stop on one. In Fire Emblem Fates, event tiles are much less numerous, appearing mostly in skirmishes, and rarely in main chapter battles; they are completely absent in Fates: Conquest. In both games all feature a distinct sparkling effect floating above them to indicate their position, and they also display a question mark bubble when a unit is moved on top of them.

In Fates, main chapters and paralogues normally have no event tiles, while skirmishes usually have exactly two event tiles.

In Awakening, there are four possible outcomes when stopping on an event tile: gaining experience, gaining weapon proficiency, finding a random item, and boosting support (if paired up units stand on the tile). In Fates, only the first three can occur. Each of the non-bonus characters has a unique line tied to each of the first three events, and multiple lines tied to the fourth event.

A character that gets this bonus will be given a random amount of experience points. This event works exactly the same as the event at the Barracks.

This is the same list that is also used for the Barracks.

With the exception of the Glass weapons (which debuted in the previous game in the series) and the Seed of Trust (which reappeared in the following game), all of these items are unique to Awakening.

This bonus is only available to a unit who's paired up with another unit and capable of supporting with that unit. After a conversation, the two units involved will gain some support points. It works exactly the same as the equivalent Barracks event.