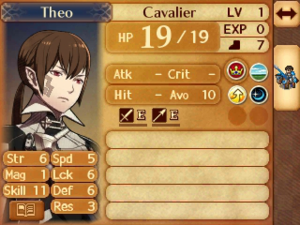 An example of a bond unit, in this case a pair-six male created between two Revelation players with its default name Theo. Note the distinguishing brand on the portrait, the Nobility skill in the personal skill slot, and skills inherited from the source players.

Bond units are a type of guest unit introduced in Fire Emblem Fates.

Bond units are created when two players register each others' calling cards and exchange accessories in their My Castles; starting from the point of both players' acceptance of the calling cards, a mutual alternating exchange of two accessories each should result in the creation a bond unit, after which a brief cutscene plays at the time of the accessory exchange which triggers it. Most bond units tend to resemble the avatars of the players who created the bond unit aside from a special distinguishing brand on their faces; some bond units instead resemble the hooded man.

Each bond unit is assigned a default name, gender, and personal skill linked to one another at random from one of six predetermined pools, each based on the campaigns of the source avatars. Bond units can be renamed upon their creation, and hence are not limited to the defaults.

Each of the six pools contains nine pairs of these combinations, each pair containing one male and one female, for a total of 18 name-gender-skill combinations per pool. When the bond unit becomes eligible to be created, a combination configuration is chosen to be applied to the campaigns of both the player's castle and their partner's. For example, if the combination configuration chosen is pair-three female, a Birthright player with a Birthright partner will get a unit with Himawari as her default name and Divine Retribution as her personal skill, while a Conquest player with a Revelation partner will get a unit with Pepper as her default name and Fortunate Son as her personal skill.

Bond units will always have the Nohr Prince or Nohr Princess class tree (depending on the bond unit's gender) for their first Partner Seal reclassing option, while tending to have randomized class trees for both their initial class tree and their second Partner Seal reclassing option. These classes are determined at the point when the bond unit becomes eligible to be created, and are the same for both the player and their partner at the designated point in a cycle; for example, if a pair 4 female in a cycle has Dark Mage for their initial tree and Ninja for their secondary tree, both the player and their partner will get a bond unit of this combination.

Due to a presumable oversight, a bond unit cannot use a Partner Seal to reclass to a class in their initial tree, hence a bond unit cannot get all of the skills from their initial tree and should not be reclassed out of that tree until level 15 advanced at earliest (for example, if a bond unit's inital class is Dark Mage, this means that bond unit will have to do without, at minimum, either Vengeance and Bowbreaker or Seal Magic and Lifetaker, provided these skills aren't inherited).

Bond units, like child units, also inherit the last eligible equipped skill from each of the avatars, which are determined upon entering the other person's castle (that is, changing around the player's avatar's skills while in the target castle will not manipulate the results, but doing so before entering the target castle will manipulate the results); apart from the use of different campaign combinations between them, this is the only trait that can vary between the bond unit created by the player and their partner at a given point in the cycle. An additional inheritance quirk specific to bond units involves an otherwise-eligible class skill being the target bond unit's personal skill, in which case a different class skill gets inherited instead (example: A Revelation player sets Nobility in their avatar's fifth slot when about to bond with another Revelation player with Dragon Fang in the fourth slot, but the target bond unit is the pair-six male Theo, who has Nobility for his personal skill, in which case Dragon Fang will be the player's contribution to Theo's skills). In the event both players are set to contribute the same class skill, the skill in question will be considered the partner's contribution, with the player's contribution falling back to the next eligible skill.

Much like their class trees, a bond unit's base stats and modifiers are also random, and are also determined when the bond unit becomes eligible to be created; as with the class trees, these will be the same for both the player and their partner at the designated point in the cycle.

Like other guest units, bond units have a section of the Avatar Logbook where their data is registered; data is registered automatically upon a bond unit's creation. This allows players to update their bond units in the Avatar Logbook. In addition, this also allows players to return bond units to the party should their data remain in the Avatar Logbook but the unit itself is removed from the party (either manually or via death), as well as cross bond units over to other save files, even to a campaign that does not support its creation combination (example: A player can take their registered Birthright-Revelation pair-eight female, Mizuna, and her personal skill Camaraderie, and pay a fee to import her into their Conquest file).

Bond units in this pool are created when both partners use Birthright castles.

Bond units in this pool are created when both partners use Conquest castles.

Bond units in this pool are created when both partners use Revelation castles.