Cyril is a commoner born in Almyra. In Imperial Year 1170, Cyril lost his parents during a battle with Fódlan armies and ended up as an orphan, which forced him to grow and mature fairly quickly. In 1177, Cyril participated in one of Almyra's skirmishes in Fódlan's Throat and was captured, becoming one of the servants of House Goneril. In 1178, Archbishop Rhea found Cyril, recruited him as a servant at Garreg Mach Monastery, and provided him shelter, a situation Cyril appreciated, leading him to become loyal and experience gratefulness towards the Archbishop. During his time there, he became Shamir's apprentice.

While Cyril can be found in the monastery during Garland Moon, he officially introduces himself to Byleth alongside Shamir in the following month, just as Byleth's chosen class has been tasked with preparing the security for the upcoming Rite of Rebirth. When Emperor Edelgard von Hresvelg of the Adrestian Empire declares war on the Church of Seiros, Cyril fights in the Battle of Garreg Mach on the Church's side, but is defeated.

On all routes other than Crimson Flower, Cyril returns to the monastery on the day of the millennium festival and accompanies Byleth throughout the war with the Empire. On the Crimson Flower route, Cyril is one of the commanders of the combined Kingdom–Church army in the final battle in Fhirdiad; he can be either circumvented or slain at the player's discretion.

Cyril is a recruitable playable character on the Blue Lions and Golden Deer routes, is automatically recruited in Chapter 12 on the Church of Seiros route, and is a recurring enemy on the Crimson Flower route.

At the beginning of Part II, Cyril automatically gains 3 level-ups.

At the beginning of Part II, Cyril automatically gains 3 level-ups.

Aptitude is included in all growth rates.

Cyril has a lot to offer in his kit. His personal skill, Aptitude, boosts all of his growth rates by 20%. Contrary to what the ability may imply, they only bring up his growth rates to on par with most units, with none of his enhanced growths dipping below 30%; without Aptitude, his growth rates would have been awful otherwise. After factoring in his personal skill, Cyril has very good growths in HP, Strength, Dexterity, Speed, and Luck. His resistance growth is rather decent for a physical unit, but his defense growth is somewhat low. He boasts proficiency boons in all of the skills required to access the Wyvern Lord and Bow Knight classes, solid offensive growths, and powerful combat arts in Vengeance and Point-Blank Volley.

His performance in practice is highly route-dependent. On the Blue Lions and Golden Deer routes, he can be recruited as early as chapter 5, just shy of the level requirement to start working on his intermediate classes and the Bow level required for Point-Blank Volley; if you want, you can wait to recruit him in chapter 6, so that you can immediately place him in an intermediate class. It doesn't take much effort to push him into Brigand or Archer and have him immediately start contributing. He is particularly useful on the Azure Moon route as an Archer in Chapter 5 since out of the Blue Lions' early three-range options, Mercedes is terrible in physical classes, Ashe is sub-par in general, and Felix may not have access to his own three-range abilities depending on which part of his kit you are leveraging.

On the other hand, if Byleth is on the Black Eagles route, Cyril cannot be recruited until chapter 12, and only if the player sides with the Church instead of Edelgard. By the time Cyril joins Byleth's party, his otherwise excellent growths have been wasted for 12 levels on the Commoner class (which does not provide any boosts to his growth rates). Unlike all of the recruitable students and Church members, Cyril does not benefit from a late recruitment at all, due to the fact that he auto-levels as a Commoner throughout the entirety of Part I, and will stay that way without player intervention; again, the player cannot do anything about it, owing to plot complications regarding the route split in Black Eagles, preventing Cyril from joining early. Because Cyril is effectively a forced late recruitment, this significantly harms his base stats and performance, and will more often than not remain a liability unless the player is willing to put the effort to salvage his terrible bases. Not helping the matter is that he joins at the same time as Seteth, who is already classed as one of Cyril's best classes without investment on the player's part.

Like nearly all physical units, Cyril wants to go through the Brigand class to pick up Death Blow and improve his player phase no matter which favored class lines you ultimately want him to pick. After that, he can go through Wyvern Rider to Wyvern Lord to help patch up his average Strength and provide general physical prowess or Archer to Sniper to Bow Knight to take advantage of Point-Blank Volley and the high range of bows.

Cyril is extremely grateful to Rhea for saving him from his life as a war orphan, and wants to be useful to her. He takes his duties at the monastery very seriously, to the point where he can come off as cold sometimes. He has a widely respected work ethic.

Cyril, Limitless Potential (single ending)
Unable to serve Rhea any longer, Cyril nearly left the church. He was persuaded to stay, however, to assist in rebuilding the monastery he had helped maintain. Thanks to his devoted work ethic, the Officers Academy was able to reopen a few years later. When the new students took the reception hall, Cyril found himself among them.

Byleth, Wandering Flame/Ruler of Dawn & Cyril, Limitless Potential (Silver Snow, Verdant Wind)
Byleth declared the founding of the United Kingdom of Fódlan at Garreg Mach and ascended the throne as its first leader. Cyril served as a chamberlain, supervising all general affairs. With the expansion of the kingdom, it was eventually decided that the queen would move to a new royal capital. Cyril wished to accompany her, but was ordered to enroll in the newly reopened Officers Academy. Though reluctant, he complied. A year later, after consistently demonstrating great wisdom and maturity, he won the queen's heart, and they announced their abrupt marriage. The move surprised many, but no one was as shocked as Cyril himself was pleased.

Byleth, Guardian of Order & Cyril, Limitless Potential (Azure Moon)
Byleth took on the role of archbishop of the Church of Seiros, and Cyril served her in all things, just as he had served Rhea. As Fódlan stabilized, and the rebuilding effort came to an end, the Officers Academy finally reopened, and the archbishop directed Cyril to enroll there as a student. A year later, after consistently demonstrating great wisdom and maturity, he won the archbishop's heart, and they announced their abrupt marriage. The move surprised many, but no one was as shocked as Cyril himself was pleased.

Petra, Queen of Brigid & Cyril, Limitless Potential
Petra returned to her homeland of Brigid, and inherited the throne from her grandfather. As ruler, she declared independence from Fódlan, and renegotiated Brigid's diplomatic ties on more equal terms. Some years later, the Church of Seiros expanded its reach to Nuvelle, a town in western Fódlan. The priest sent to this new church, for the purpose of keeping up relations with Brigid, was none other than Cyril. He and Petra met frequently, first for public relations, and then for more private reasons. They fell in love, and were ultimately wed. It is said that their union served as a symbol for the friendly ties between the two countries for the whole of their lives.

Ashe, Arrow of Justice & Cyril, Limitless Potential
After the war, Ashe was formally knighted and appointed the new head of House Gaspard, which had no successors. The young and inexperienced lord faced a great deal of difficulty in governing, until his court was blessed with a new adviser in Cyril. Using skills he learned during his time as a student at the Officers Academy, Cyril offered Ashe the advice he needed to grow into a worthy lord. Over time, Ashe gained the respect of his people, and Gaspard territory prospered. The pair swore always to be there to help one another, and remained best friends for the whole of their lives.

Lysithea, Scholar of Misfortune & Cyril, Limitless Potential
Lysithea returned home to help her parents restore their family land. Years later, when their work was at an end, she journeyed to Garreg Mach to inform the church of her decision to relinquish House Ordelia's claim to nobility. There she encountered Cyril, who had since graduated from the Officers Academy and joined the Knights of Seiros. During their reunion, Cyril confessed his love to Lysithea and asked her to marry him. She declined, at first, due to her shortened lifespan, but in the face of Cyril's insistence, she chose to spend what days she had remaining together with him. Where they went is unknown, but it is said that, for however long it lasted, they were happy.

Hilda, Free Spirit & Cyril, Limitless Potential
Hilda returned to her territory, and founded the first artisan academy in Fódlan. Years later, as the successful headmaster of that school, she journeyed to Garreg Mach to make a donation to the church. There she encountered Cyril, who had graduated from the Officers Academy and joined the Knights of Seiros. When each saw how much the other had grown and matured, a mutual attraction between them blossomed naturally into love. Cyril eventually left the church to become a knight of House Goneril, at the invitation of Hilda's brother, Holst. As Holst's new brother-in-law, Cyril provided essential aid in negotiations with House Goneril's Almyran neighbors.

Shamir, Distant Archer & Cyril, Limitless Potential
Shortly after the war, Shamir and Cyril disappeared from the ranks. The Knights of Seiros searched unsuccessfully for them for some time, but finally resigned themselves to the loss. Though the pair was never officially heard from again, rumors swirled persistently for years of two master archers turned thieves. Initially the knights received complaints and investigated, but when it was discovered that the pair only lined their pockets by shaking down those who preyed upon the innocent, they decided it was not an investigation worth pursuing. The thieves' story became a folktale beloved by the people.

Cyril is featured on two cards in Fire Emblem Cipher. 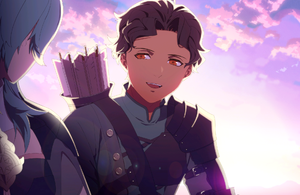