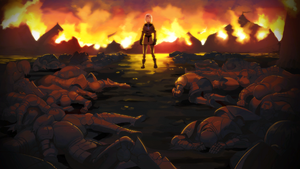 A young Dimitri watches in horror as his family and the royal guard are massacred.

The Tragedy of Duscur (Japanese: ダスカーの悲劇 Tragedy of Duscur) was the regicidal assassination of the Faerghus royal family and their guard on a diplomatic mission to Duscur, and also the retaliatory massacre of the Duscur people, the alleged perpetrators of the initial incident.

When the Holy Kingdom of Faerghus suffered from a terrible plague in Imperial Year 1165, claiming a number of lives, a scholar from the Adrestian Empire named Cornelia Arnim cured the Kingdom's populace. As a reward, King Lambert appointed her Court Mage. Sometime before 1168, when she kidnapped and experimented on Hapi, she suffered a sharp change in personality. It's implied that she was killed and replaced by an Agarthan imposter.

Cornelia gave refuge to Imperial Queen Consort Anselma in the Kingdom during the Insurrection of the Seven in 1171. At that same time, Volkhard von Arundel took Imperial Princess Edelgard von Hresvelg to live in Fhirdiad, the Kingdom Capital, for a short time. Soon, Cornelia introduced Anselma to King Lambert, who quickly fell in love with her. They were privately wed, Anselma took up the name Patricia, and as such she became the stepmother of Crown Prince Dimitri.

Cornelia manipulated Anselma while she was married, for she told her that her daughter Edelgard was staying in Fhirdiad, and she explained that Lambert was hiding that from her. Cornelia also kept Anselma and Lambert separated as often. Dimitri notes that his stepmother was caring, yet distant, the only memory remaining of her is her staring longingly into the distance. In 1176, Cornelia convinced Anselma to take part in the Tragedy, in exchange to be with Edelgard once again.

Cornelia promised House Kleiman, a noble house from the western Kingdom, that they would receive more power and land if they assisted in the regicide of King Lambert. Overall, Houses Kleiman, Gideon, Mateus, Rowe, and Gaspard participated in the Tragedy and the massacre thereafter, seeing it as an act of justice, for they disagreed with King Lambert's ideologies.

The Faerghus royal family and the scion of House Fraldarius, Glenn, were attacked in their carriages while on a diplomatic trip to Duscur in 1176. Nearly everyone was killed in the incident, the sole known survivor being Dimitri. In the Azure Moon route, Rodrigue explains that Lady Patricia's carriage was unharmed as well, and one of Viscount Kleiman's men explains that they were given direct orders not to harm it. Her corpse was never found, and her ultimate fate after the Tragedy was lost to history.

Following the incident, the people of Duscur were blamed and slaughtered. One of the few survivors, Dedue, was rescued by Dimitri. He attempted to prove that the Duscur people were innocent, arguing that he witnessed the assassination himself, but he was ignored.

Immediately afterward, the Kingdom annexed the Duscur peninsula, which became the region now governed by House Kleiman, who were rewarded by Cornelia and those who slither in the dark for their participation in the assassination.

The Tragedy of Duscur would haunt Dimitri for the rest of his days. He continued to hallucinate the voices of his lost family begging him to avenge them with the death of their killers, which drives him to kill anyone he thinks was a part of the incident, including his stepsister Edelgard.

However, contrary to his beliefs, Edelgard was not involved with the Tragedy in any form. Edelgard, as the Flame Emperor, tells Thales and Kronya that the Agarthans would never see their goals through because of both the Tragedy and the Insurrection of the Seven. Edelgard, in Crimson Flower, reveals that her uncle Lord Arundel was behind the entire attack, and since he is Thales in disguise, the Tragedy of Duscur was likely committed in order to give Cornelia higher power within the Kingdom and bring Faerghus under Agarthan control.