The Sword of the Creator (Japanese: 天帝の剣 Sword of the Emperor of Heaven) is a regalia weapon which first appeared in Fire Emblem Heroes and made its proper debut in Fire Emblem: Three Houses. It was once wielded by Nemesis in his conflict with Seiros, and is later the personal weapon of Byleth, granting them the ability to use the Ruptured Heaven combat art and to attack at 2-range by extending its blade like a whip. Unlike traditional personal weapons, the Sword of the Creator can be used by any unit; however, unlike other Heroes' Relics, if anyone other than Byleth equips it, it loses all of its unique power and becomes substantially heavier.

The Sword of the Creator is one of the Heroes' Relics of Fódlan. It was originally forged from the goddess Sothis's heart and bones by the so-called Liberation King Nemesis and wielded by him in the War of Heroes against Seiros, but he was slain and the blade taken from him. The Sword of the Creator was eventually placed in the coffin generally presumed by the public to contain Seiros' remains. Approximately 1000 years later, a squad of soldiers led by the Death Knight raided the tomb in an attempt to collect the blade, but were repelled by Byleth and their students. The soldiers managed to unlock the seal containing the Sword of the Creator, and Byleth proved to be able to wield its full power due to the Sword reacting to the Crest Stone within Byleth's heart. In response, Archbishop Rhea entrusted the sword to Byleth. Several months later, Byleth was caught in a spell created by the dark bishop Solon and trapped in a realm of darkness. In order to save them, Sothis sacrificed herself to grant Byleth her power, awakening the true potential of the Sword of the Creator. Byleth would continue to wield the blade throughout the conflict that would erupt in Fódlan over the next five years.

If Byleth chose to lead the Golden Deer, Nemesis was resurrected by "those who slither in the dark" to continue their campaign against Seiros and humanity. He was armed with an Agarthan copy of the Sword of the Creator known as the Dark Creator Sword, but slain for good by Byleth and Claude. 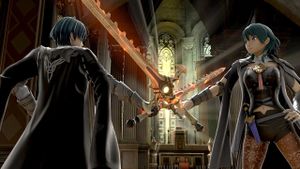