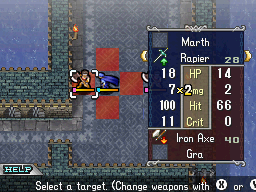 Attack speed (Japanese: 攻撃速度 attack speed), abbreviated AS (Japanese: 攻速), is a calculation based on a unit's speed which acts as their practical speed stat in battle. In all games until Fire Emblem: Shadow Dragon, attack speed factors in the weight of a unit's weapon, simulating the bulk of heavier weapons encumbering them in battle more than lighter weapons, with the effect thereof in turn mitigated by a unit's strength or physical bulk in games from Thracia 776 onward.

The primary use of attack speed is to determine whether or not a unit is fast enough compared to their opponent to allow them to perform a follow-up attack (Japanese: 追撃 pursuit), more commonly known as "double attacking" or "doubling". In a battle, the two participants' mutual attack speed is compared, and if one unit meets a certain threshold of higher attack speed than the other, they are allowed to follow up against the opponent: to perform a second attack after both units have performed their first attacks.

Attack speed is also used in turn in a unit's avoid calculation, directly impacting a unit's ability to dodge oncoming attacks in conjunction with other factors, including terrain benefits and a unit's luck stat.

In Genealogy of the Holy War, attack speed can be negative. This is not true in any other games.

From New Mystery of the Emblem through Fates, weapon weight is not present and attack speed is calculated solely based on the speed of the two units.

In Fire Emblem Engage, attack speed is presented as the speed stat with a debuff from weapon weight.