Failnaught (pronounced /'feɪlnɔt/[key], Japanese: フェイルノート Failnaught) is a regalia bow that debuted in Fire Emblem: Three Houses. It is one of the Heroes' Relics, and is tied to the Crest of Riegan. 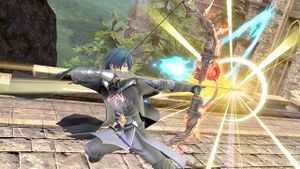 Byleth wields Failnaught along with several other Heroes' Relics as a playable character in Super Smash Bros. Ultimate. It is used in their neutral aerial, where Byleth spins it around them, and neutral special, where Byleth shoots an arrow that can be charged up for more power.