Bolganone (Japanese: ボルガノン Bolganone) is a recurring magic tome of considerable power, portrayed as a volcanic eruption striking the target of the spell from beneath their feet. Debuting in Shadow Dragon & the Blade of Light as an uncategorized tome, it was Genealogy of the Holy War which defined it as a fire tome. In most of its appearances, it is roughly equivalent in power and esteem to Thoron and Tornado, generally sharing the same weapon level and accordingly acting as a fire counterpart to their wind and thunder roles. 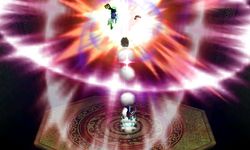 The end of Robin's Final Smash in Super Smash Bros. for Nintendo 3DS, for which she uses Bolganone.

Bolganone appears briefly as part of Robin's Final Smash, Pair Up, in Super Smash Bros. for Nintendo 3DS and Wii U. Although visually difficult to discern, it appears to comprise the final, most powerful strike Robin deals in the Final Smash; Robin shouts out the spell's name just before they and Chrom end the attack.