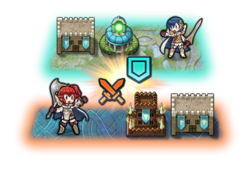 Aether Raids (Japanese: 飛空城 Flying Sky Castle) is a game mode in Fire Emblem Heroes, introduced to the game on November 9, 2018. During Aether Raids events, players can create Aether Keeps with certain structures to attack and defend with certain teams to increase their lift.

As Anna stares at an Aether Keep in shock, Alfonse explains that the abandoned keep was first occupied by the first King of Askr, Líf. Anna is unsure on where the exact source of the information given to them came from, but Sharena rushes to Anna and Alfonse asking them what the destroyed object was used for. Alfonse looks in the partially burned down library and then explaining to Sharena that Askrans would once come to do battle high in the skies seeking power as a single goal, while using various offensive and defensive weapons. Sharena is excited to hear about the keep's weaponry and asks if there are any more around. Anna states that it will be looked at later as they explore the Aether Keep.

Players can edit an Aether Keep (Japanese: 飛空城 Flying Sky Castle) and freely test their defensive map's structures without consuming Aether. Aether Keeps are split into two maps, the Defense Map for defending your keep and the Offense Map for attacking an opponents keep.

Players may use a resource named Aether (Japanese: エナジー Energy) that acts as stamina to participate in Aether Raids which restores a certain amount once each day and fully during the start of a new season. For every first battle each day, the Aether cost is 0, and the total cost of Aether to battle increases as your lift is raised higher.

Your current tier is based upon your Lift which changes based on your attack and defense results. Using bonus characters in your team grants you +20 bonus to your Lift, but only one bonus character with the highest value is counted. If you lose the battle while attacking an opponent's Aether Keep, you'll acquire less Lift. Once you achieve tier 11, you will be able to unlock a 5th slot in your offensive teams for 300 Aether Stones. Furthermore, you can spend another 300 Aether Stones for a 5th slot in your defensive team. You can unlock a 6th slot for offensive teams on tier 19, once again for 300 Aether Stones.

Structures can be placed on any map to defend an Aether Keep or decorate, but some cannot be removed and/or destroyed. Other structures are available for a limited time, but the required items can be obtained during that time. Up to five structures (including the fort) can be carried when attacking an opponents Aether Keep.

These structures are used to help defenders of an Aether Keep.

These structures are used to help attackers of an Aether Keep.

These traps trigger when an a foe ends movement on one.

These structures have no combat effects and are solely for decorating an Aether Keep.

Players can change the terrain of an Aether Keep, though some terrains require Aether Stone to unlock.