This page is about the mechanic in Fire Emblem Heroes, for the class see Summoner; for the skill see Summon. 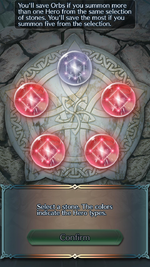 The summon screen, with five colored orbs waiting to be utilized.

Summoning is an important action done by the player in Fire Emblem Heroes. The player can summon heroes from across the Outrealms to the world of Zenith.

Summoning is a crucial gameplay element of Heroes, and is deeply intertwined with Orbs. It is the primary method for the player to recruit heroes—Fire Emblem series characters—into their army to fight for Askr. 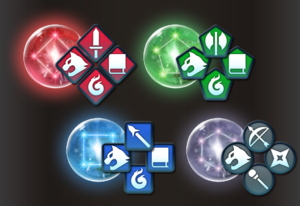 Image demonstrating what orb matches what set of weapons.* 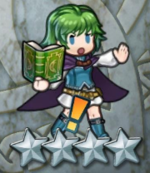 Nino's exclamation mark, showing she is a hero that has not been summoned before.

When summoning a random selection of five total orbs, selected from the four types above appears. The player is locked into this random selection upon entering the screen, having already paid for one summon to enter this screen. The player can choose whichever of the five orbs they desire, and a character will be summoned using it.

Additionally, if the hero summoned has not been summoned by the player before, they will have an orange exclamation mark over them. 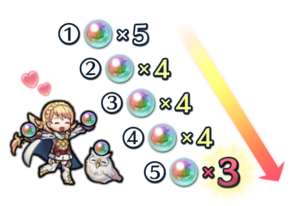 Summoning more heroes at once provides a discount, up to five heroes summoned. The catch is the player cannot choose the five Orb colors, which are randomly selected when starting a summoning session. This means possible characters is limited somewhat by their equipped weapon type, due to Orb color.

The player can summon five heroes with 20 Orbs if done consecutively, if done instead individually, it would cost 25 Orbs.

On August 7th, 2017, the percent chances for 3★ and 4★ units were swapped, as detailed below, so that players have a greater chance of summoning 4★ heroes.

Upon entering the summon menu the player is presented with at least one ongoing summoning event, where certain choice, and often new, characters have a heightened chance to appear. When summoning, the player must always start by choosing an event, commonly called a "banner" by players, to summon from. So far in the game's lifespan there have never been any instances of no active summoning events.