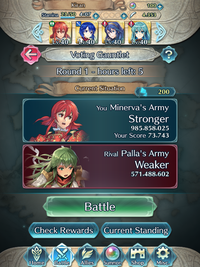 A Voting Gauntlet in progress, showing the state of the contest between Palla and Minerva.

The Voting Gauntlet (Japanese: 投票大戦 Voting Battle) is a gameplay mode in Fire Emblem Heroes, which pits themed groups of characters from across the Fire Emblem series against each other in a contest of popularity.

At the start of each Voting Gauntlet, the player is shown the bracket for the contest, and asked to select which character they would like to support. The player must then earn points for their chosen character by participating in Voting Gauntlet battles; these battles do not consume stamina, and may be fought once every 30 minutes. The total score of all players supporting a character determines that character's score. Each round runs for 45 hours. At the end of each round, the characters with the lowest score in each matchup are eliminated from the contest, and the winners proceed to the next round. If the player's chosen character is victorious, they will continue to support them in the next round; if not, they will be asked to choose another character to support.

Battling for your team

Battles in the Voting Gauntlet pit the leaders of the player's current team, a randomly chosen friend who supports the same character, and a random player from the player's supported character's team, against the preferred characters of three randomly selected players from the opposing character's team. The objective is to simply defeat all three members of the opposing army. Unlike in the Arena, Light's Blessing may be used, and the player's score is not penalized if any player characters are defeated; however, experience and skill points cannot be earned.

If the player is victorious, they earn points based on the number of friends they have (50 points for no friends, plus 5 additional points per friend, up to a maximum of 100 points), and receive a 10% bonus if they used the same character as the one they are supporting. The player may also use Battle Flags to boost their score; the score will be multiplied by the number of Battle Flags spent, up to a maximum of 200.

For the third Voting Gauntlet (Battle of the Mages), the scores earned by players on a losing team was tripled, in order to give them a better chance of competing. From the fourth Voting Gauntlet (War of the Clerics) onward, this multiplier is instead based on the length of time elapsed since the beginning of the round, starting at 3.1×, and increasing by 0.1× each hour to a maximum of 7.5× in the final hour. For the first six Voting Gauntlets, a team was designated as "weaker", and would receive this bonus, if their score equated to 90% or less of the leading team's score; from the seventh Voting Gauntlet (The Blood of Dragons) onward, this requirement was changed to 99% or less.

At the end of each round, players are ranked based on their individual scores, and are awarded Hero Feathers based on their ranking within their chosen character's team—the higher a player's ranking is, the more Feathers they earn. Players supporting a winning character also receive a bonus 500 Feathers in the first two rounds, and 1,000 Feathers for supporting the winner of the final round. At the end of the overall contest, players also receive Hero Feathers based on their overall ranking across all participating players.

In earlier gauntlets, if the total points earned across all characters in all three rounds exceeds a given amount, all players will be rewarded with a number of other prizes in the form of special log-in bonuses—these may include Orbs, Hero Feathers, and Badges. In more recent gauntlets these prizes have been shifted over daily quests; generally requiring the player to participate in a set amount of battles in the gauntlet.

This Voting Gauntlet ran from 7am UTC on 1 July, 2022, until 4am UTC on 7 July. The overall winner was Valter, who defeated Altena in the final round by over 180 million votes.

This Voting Gauntlet ran from 7am UTC on 30 July, 2022, until 4am UTC on 5 August. The overall winner was Dimitri, who defeated Thórr in the final round by over 4 billion votes.

All characters in this gauntlet use their summer variations.