Not to be confused with Ferdinand.

Fernand (Japanese: フェルナン Fernand) is a noble and former knight of Zofia. Following Desaix's coup of Zofia, he joined the Deliverance, a group of freedom fighters formed by his friend and fellow nobleman Clive, but following Clive's ceding of the Deliverance's leadership to Alm, a youth of no noble blood, Fernand abandoned the Deliverance and instead defected to Rigel, becoming a subordinate of the imperial prince, Berkut.

Fernand is a new character introduced in Fire Emblem Echoes: Shadows of Valentia, and did not appear in the original, Fire Emblem Gaiden.

Prior to the game's events, Fernand's family were killed by the commoners living on their lands, who blamed Fernand's family for failing to provide for them during the drought that had engulfed Zofia following the disappearance of the Earth Mother, Mila. Due to this tragedy, Fernand's trust in the common people was shattered, and he was never the same man again.[1]

Fernand first appears following the first battle of Southern Zofia, where, upon learning of the fall of the Southern Outpost, he rode out in order to aid Clive's sister, Clair, who had been taken captive at the outpost. However, a group of villagers from Ram led by Alm and Lukas had liberated the Southern Outpost and freed Clair before Fernand could arrive. Fernand is frustrated that Lukas would have allowed common villagers to join the Deliverance, but is convinced to accept them by Clair, who reminds him of Clive's belief that a soldier's worth should not determined by their birth. He eventually returns to the Deliverance Hideout in disgust, after Clair chooses to remain with Alm's group instead of returning with him.

Fernand reacts violently to Clive's declaration that Alm is to become the new leader of the Deliverance.

Shortly after this, Alm and his group arrive at the Deliverance Hideout, and are greeted heartily by Clive, who is grateful to them for rescuing his sister. Clive decides that, with the increasing number of commoners joining the Deliverance, he should cede the Deliverance's leadership to Alm, the grandson of the legendary knight Mycen, as he believes that Mycen's story of rising above his common birth to become a knight and count of Zofia resonates with the commoners, and Mycen's grandson would be better suited to lead them.[2] Fernand is outraged by this, and abandons the Deliverance on the spot, rather than allow himself to be led by a common villager such as Alm. He leaves the Deliverance Hideout, and is arrested by Desaix's soldiers shortly after.

Following his arrest, Fernand is brought before Desaix at Zofia Castle. Fernand tells Desaix of his decision to quit the Deliverance, and of its new leader. Desaix mulls over this new information, before determining that, rather than killing Fernand, he should instead serve under Berkut, the imperial prince of Rigel, who Desaix claims better befits Fernand's ideals. Fernand tells Berkut of Alm, the commoner now leading the Deliverance, to which Berkut responds that a commoner cannot hope to successfully lead an army of knights. Fernand is immediately enraptured by Berkut's words.[3] The two observe the battle between the Deliverance and Desaix's forces, but the Deliverance proves victorious, forcing Berkut to retreat, with Fernand following him. 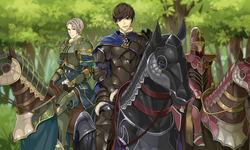 Fernand and Berkut challenge the Deliverance at the Forest Crossroads.

Fernand next appears in Alm's portion of Act 3, as part of a battalion led by Zakson of the Rigelian army in northern Zofia. The members of the Deliverance are shocked to see Fernand as part of the Rigelian army, but Fernand explains that he believes Rigel's morals and standards to be worth fighting for, and that he would rather see Berkut unite Valentia under Rigel's rule, than fight for Zofia alongside a group of commoners.[4] Fernand claims that Clive was wrong in making Alm leader of the Deliverance, as his main reasoning, that Alm was Mycen's grandson, was a lie. This, together with a similar claim made by a man at Zofia Castle, plants doubts in Clive's mind. Battle ensues, and the Deliverance once again are successful, forcing Fernand to retreat. He rejoins Berkut's group at the Forest Crossroads, where Berkut decides to challenge the Deliverance himself for "sport", with a small group consisting of himself, Fernand, and a single Paladin. This proves to be a misjudgment on Berkut's part, and he is defeated and forced to withdraw. 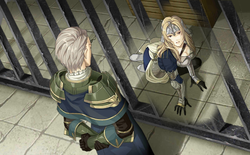 Fernand informs the captured Mathilda that he has sided with Desaix.

Before departing for Rigel, Fernand visits Desaix's Fortress, where Clive's lover Mathilda is being held prisoner. Fernand informs Mathilda of his decision to leave the Deliverance. He states that he has no desire to fight for Zofia again, despite Mathilda's attempts to convince him to reconsider; however, he does muse that, with Mathilda by his side, he might have remained with the Deliverance.[5] Fernand departs, saying what he expects to be his final farewell to Mathilda, as she is due to be put to death by Desaix. Following Desaix's defeat, Clive voices his fears that he may have erred, presumably in reference to his decision to make Alm leader of the Deliverance, but Alm states that he simply wishes to repay the trust Clive placed in him, and that despite Fernand's treatment of him, he would not hesitate to welcome Fernand back to the Deliverance if he would choose to return. 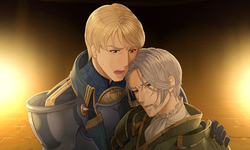 Fernand dies in Clive's arms after warning the Deliverance about Berkut and Duma.

Fernand next encounters the Deliverance on the border between Zofia and Rigel, where Berkut intends to defend Rigel to atone for his failure in the Forest Crossroads. Despite their best efforts, Alm once again prevails against Berkut, who withdraws at Fernand's request. As Fernand withdraws himself, he silently questions the motives of the Duma Faithful.[6] Fernand is not seen again until after the end of the war and the death of Emperor Rudolf. Upon learning that Alm is Rudolf's son and the rightful heir to the Rigelian throne, Fernand searches for Berkut to comfort him. He discovers him deep in the Duma Tower, where Berkut, consumed by his lust for revenge, sells his fiance Rinea's soul to Duma to obtain the power he needs to defeat Alm. The unhinged Berkut sics Rinea, turned into a Witch, on Fernand, and he is mortally wounded. Fernand makes his way back to the entrance of the temple, where he encounters Alm one last time. Fernand reconciles with Clive, warns Alm about Berkut, begs him to stop Jedah and Duma, and dies in Clive's arms.

Fernand is one of the characters added to the game in the Serpent's Whispers update, and was made available to players in the fifty-sixth Grand Hero Battle, which initially ran from June 9, 2021 with no end date announced. Only one variation of Fernand is currently available in Heroes, based on his Echoes: Shadows of Valentia incarnation.

Because his family was killed by rebelling villagers, Fernand is very hostile towards commoners, especially towards Alm when Clive asked him to be the Deliverance's commander, simply because he was of common birth. This hatred is what caused Fernand to leave the Deliverance and ally himself with Desaix. He is also quite judgmental, as shown when he berated Lukas for allowing Alm and his friends to join the Deliverance and refusing to listen to Lukas' explanation.[7]

Fernand is featured on one card in Fire Emblem Cipher.