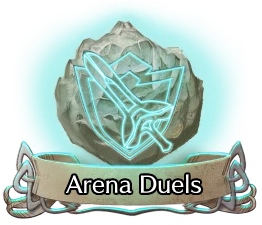 Arena Duels (Japanese: 闘技場 Arena) is a competitive gampeplay mode introduced in Fire Emblem Heroes. It is named after arenas, a facility in previous Fire Emblem series games. Unlike arenas in other games, players' teams fight other players' teams on a map instead of in one-on-one battles.

Offensive battles are the primary interaction that the player will have with this mode. Upon entering the Arena Duels menu and selecting battle three enemy teams will be presented to the player. These teams are sorted in three difficulties, Beginner, Intermediate, and Advanced, from easiest to hardest. Challenging more powerful teams nets a higher score.

Upon successfully defeating their opponents the player is rewarded with points. If the player loses one of more of their units during the battle their reward points are reduced; if they lose the battle entirely they receive no points and their streak and its chain bonus are broken.

There are currently fourteen rotations of ten maps each. Prior to January 2018, rotations consisted of five maps each; the four rotations that existed under the old system along with ten maps introduced at that point were rearranged into the current system, with the original first rotation becoming part of the current first rotation alongside five new maps, the original third rotation becoming part of the current second rotation alongside five new maps, and the original second and fourth rotations becoming the current third rotation. Additional rotations were later introduced, but did not introduce any more unique maps into the game until August 2020 brought an additional twenty maps in two waves; the fourth through twelfth rotations consist of varying configurations of the maps from the first three rotations.

Although there are currently fourteen rotations of maps, there are only 50 unique maps among them.

Defending is done passively; other players will attack the player's assigned defense team. If the player's team wins, he or she will gain defense points.

At the end of the arena season (typically Monday), the player's scores are tallied, players' points will be reset, players may change tier, and they can claim rewards. Rewards are based on offense, defense, and tier scores.

Starting with version 1.3.0, it is possible for players at tier 8 and above to be demoted if their ranking within their own tier is not sufficient enough.

Every arena season a set of bonus heroes will be chosen. These bonus heroes significantly bolsters the player's score, by doubling it, and are very important for high ranked players to maintain their placing. Using at least one bonus hero on an offensive team will double an offense score, the same applies for defense teams as of version 1.3.0.

Consecutive wins increases the player's streak, which is broken if he or she loses before winning five battles (formerly seven). All scoring in battles in a single streak is combined into a single score, known as the chain bonus. The highest chain bonus that the player has established throughout a single season is what determines the player's tier and if they will change tier at the end of the arena season.

Upon completion of a five battle streak the player is given rewards once per arena season:

As the player scores in battles, their tier increases. All the tiers award a title, said titles are named after famous groups from Fire Emblem series games.