Mathilda (Japanese: マチルダ Machilda), is a Zofian paladin appearing in Fire Emblem Gaiden and Fire Emblem Echoes: Shadows of Valentia. She is hailed as a legendary female knight.

Mathilda is a Zofian knight, and member of the Deliverance, during the events of Act 3 she is being held prisoner by Desaix. When Desaix realizes that Alm is approaching his stronghold he orders Mathilda be be executed by archers.[3]

After Alm rescues her she joins his military force and aids him for the rest of the war, afterwards, she marries Clive, if he also survived the war. If Clive died, she takes up command of the knight's order of united Valentia in his place.

Mathilda joins in Act 3. While her availability is low, her stats are quite good across the board, although her HP and defense are on the lower end. Of a particular note is Mathilda's speed—she will double all enemies without any issue and deal significant damage. She also has a high base resistance, allowing her to face magical enemies while taking less damage than other units. Combined with her high movement and eventually promotion to Gold Knight, she will be an excellent combat unit for the remainder of the game.

Mathilda reprises her role in the remake.

Mathilda first appears in Act 3 in Desaix's Fortress as an ally unit, and she can be recruited during or after the battle. Due to not having a weapon and being stuck in a cell, she won't be able to contribute much, so it is generally recommended to protect her instead of wasting a turn recruiting her as she will join at the end of the map, if she stays alive, anyway.

Mathilda is a prepromoted Paladin in Shadows of Valentia. She has high bases in every area besides HP and Defense, but has decent growths in both areas allowing her to somewhat patch up her weak points. She also has a low growth in Resistance, though this is common for units in Shadows of Valentia, but thanks to her high base resistance she can deal with dangerous enemies such as Cantors and Arcanists relatively well. Mathilda will be a premiere frontline unit of the Deliverance, alongside units like Alm, thanks to her high bases and growths in Strength and Speed, allowing her to consistently one round most enemies. Her durability will be rather low compared so most other units, so she will not be able to take many enemies at once during the enemy phase and it can lead her to even be one shot by some of the stronger enemies if she is unlucky with her defense and HP level ups, so it's best to not expose Mathilda to too many enemies at once. Promotion to Gold Knight will greatly help her by fixing her HP and Defense, turning her into a combat demon who can wipe out armies single-handedly.

Mathilda will on average surpass other Cavaliers, such as Clive and the Villagers that have promoted to cavalier quickly, and her only competition will be Zeke when he joins, though even if you plan on using him, there is generally no reason not to deploy Mathilda alongside him unless it is for maps that are unfriendly to cavalry units. Though the terrain effects of Shadows of Valentia can often negatively affect cavalry units, they are far less common on Alm's side allowing Mathilda to make great use of her high 8 movement, which will rise to 9 upon promotion to Gold Knight.

Overall, Mathilda is a solid all-around unit who will contribute well on any team on Alm's side.

Mathilda is one of the characters added to the game in the Bitter Enemies update, and became available for summoning by players on July 13, 2017. Only one variation of Mathilda is currently available in Heroes, based on her Echoes: Shadows of Valentia incarnation.

In Gaiden, Mathilda has minimal dialogue, but she is Clive's lover, and wife at the end of the game. In Shadows of Valentia, she is shown to be an extremely courageous, calm, and driven knight with a direct manner of speech, as a result of the training she received from her father.[4]

If Clive survived
She shed her armor and became Clive's wife. The legendary female knight, Mathilda -- That name shall surely be carved within the histories of Valentia for eternity.

If Clive died
Having lost Clive, she reluctantly took command of the knights' order. The legendary female knight, Mathilda -- That name shall surely be carved within the histories of Valentia for eternity.

If Clive survived
Mathilda cast her armor aside and wed Clive. She was rarely seen in public after that, having perhaps chosen to support her husband behind the scenes instead. However, her legendary exploits as a knight are sure to live on forever in Valentian history.

If Clive died
Clive's death forced Mathilda to carry on in his place as captain of the One Kingdom's Brotherhood of Knights. The grief in her heart steeled her, and she became a key figure in the kingdom's growth. Her legendary exploits are sure to live on forever in Valentian history. 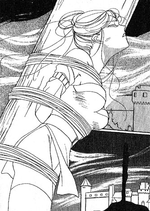 In the Gaiden manga, Mathilda has a similar role to hers in Gaiden. She has been captured and set for execution by Desaix, and Alm's forces set out to rescue her.

During the rescue mission Kliff helps untie her. During this, Kliff being distracted with helping Mathilda, Desaix fatally impales Kliff. This horrifies Mathilda. After Desaix is killed by the Deliverance Mathilda makes no further appearances.

Mathilda is featured on two cards in Fire Emblem Cipher.