Wrys (Japanese: リフ Riff) is a humble elderly curate from Talys and an ally of Marth. He volunteered his services as a user of healing staves to Marth's army during both the War of Shadows and the War of Heroes, and later ran a monastery in Altea.

Wrys lived in a village to the south of the Talys castle during the War of Shadows. He took an interest in helping Marth and had hoped to meet him for some time.[1] When Marth visited his village during the battle with Gazzak and the pirates of Galder, Wrys offered to join his cause, promising that Marth would be very glad to have the staff Wrys carried on hand to heal his wounded. Wrys served with the Archanean League through the War of Shadows, and after its conclusion, he settled down in Altea and constructed a small monastery there so he could take in and care for orphans of the war.

Two years later, Wrys was recruited by Cain to assist with the training of Altea's 7th Platoon as the team's healer. Upon meeting him, Luke was horrified to learn that Wrys was not the cute cleric he was hoping for.[2] Following the 7th Platoon's foiling of the assassination attempt on Marth, Wrys departed on a journey, although he believed that eventually he would meet a certain member of the 7th Platoon again.[3]

His belief proved to be true, as when the assassins began systematically hunting all of Marth's old allies from the War of Shadows, this included Wrys.[4] An assassin unit led by Clarisse cornered Wrys in the northern mountains of Macedon, but he was saved by the timely arrival of Marth's army. Wrys rejoined Marth once again for the duration of the War of Heroes. After the war he returned to his monastery and lived the rest of his life there, occasionally leaving to assist in the training of prospective knights.

Wrys was a curate living in a village in Talys. When Marth entered his village, Wrys requested Marth to accept him into his army. He joined Marth's army and served him for the remainder of the War of Shadows.

Wrys is the first curate to join Marth's army, and, for the first 2 chapters, is your only source of healing. However, Wrys is one of the worst units in the game, and becomes almost completely outclassed once Lena joins. He starts with a weapon level of 3, which is too low to use some of the most important staves in the game like Physic and Warp. His growth rate for weapon level is only 20%, so you would have to grind several levels to be able to use some of the most important staves in the game. Unfortunately, leveling up Wrys is very difficult, because Curates can only gain experience by surviving combat; Wrys has a base defense of 3 with a growth of 0%, and a base speed of 7—equating to 7 avoid before terrain bonuses—with a growth of 10%, and has a hard time gaining experience without getting killed. Alternately, using the Manual on Wrys will increase his weapon level to 8—which allows him to use every staff in the game—and there is little for other units to use it; on the other hand, it could be sold for 5,000 gold, and the only one in the game is in Chapter 12, after Lena, Wendell, and Maria could have been recruited and the same chapter Boah is recruited, all of whom but Lena have enough weapon level to use every staff. With a movement of 5, Wrys only having a 1-range heal isn't very useful when he has a hard time keeping up with the rest of your units. Wrys can be mildly useful in the first 2-3 chapters when you are forced to deploy him and he is your only source of healing, but Lena, Wendell, Maria, Boah, and Elice all perform better in the long term.

Wrys is a playable character.

Wrys is the first staff user who joins Marth's army in Shadow Dragon. In the early chapters, Wrys is the only source of healing beside vulneraries; in higher difficulties, this is especially important, as vulneraries are sparse and enemies are hard to defeat. Having a healer is invaluable there, and Wrys is the only healer available until Lena joins, giving him an exclusive period of healing utility no other unit in the game has.

Wrys's bases are unimpressive overall, and his base staff rank is only E, butthough it is possible to raise his staff rank to D at around the same time Lena is recruited. From there, getting him to C requires only that he is used. He can be promoted to Bishop upon reaching level 10, which gives 30 additional staff experience, half the experience required to reach B or A from the previous level.

Wrys is outclassed by Lena, who also joins early but with a C rank in staves, allowing her to use Warp with no investment, and has exclusive access to her personal staff Hammerne. He is also outclassed by Wendell, who joins promoted with better base stats, and can reclass to a different promoted class. Changing Wrys's class to anything but Curate makes him a combat unit with a poor weapon level and poor bases, so he is best off staying as a Curate. Wrys will have an equal or higher staff rank than units who reclass into a staff-using class, but will be behind all other units that are recruited in staff-wielding classes, and requires 38 staff uses to reach C staves and use Warp.

Although he was not present in either book of the original Mystery of the Emblem, Wrys returns as a playable character in both the New Mystery prologue and the main story. In his return appearance in Chapter 3x, he starts the chapter in the middle of the map, well away from the player's army, and part of the chapter's goal is to reach him in time to save him from the enemies. If he survives the chapter, in the closing cutscene Wrys gives the player the option to change Kris's hairstyle to give them a bald head.

Wrys is the only character in New Mystery of the Emblem with a unique staff named for him available through Everyone's Conditions: Wrys's Staff.

These classes are only available after beating Hard Mode.

These classes are only available after beating Hard Mode.

Wrys is an early joining healer, and as such, he will never be entirely useless. However, he is not a very good unit. Other units can reclass to Cleric or Curate and do nearly as well as a healer as Wrys does. Wrys's base staff rank is only E, which makes him strictly inferior to Marisha and Yuliya, two other early-joining healers with a C-rank in staves. Having an E-rank in staves limits Wrys to using only basic staves until he raises his rank, and increasing weapon ranks takes a long time. He does have the advantage of a higher base level than Marisha and Yuliya, but the advantage is negligible.

Overall, while Wrys is not entirely useless, he is overshadowed by other healers available early and offers nothing to compensate.

Wrys is one of the characters available to be summoned by players from the game's initial launch, and is also the tenth of twelve characters that are part of the game's Hero Battle rotation. He was first made available via Hero Battle at 7:00 AM UTC on February 11, 2017 through 6:59 AM UTC on Feburary 12, 2017, and his Hero Battle has been available during the same time period every twelve days thereafter. Only one variation of Wrys is currently available in Heroes, based on his Shadow Dragon & the Blade of Light incarnation; he was notably the only character currently available to Heroes whose incarnation is solely credited to that game prior to the addition of a pirate variation of Darros more than three and a half years later, and the only character or variation in Heroes credited to that game at all for more than three years until the The Start of It All update added five character variants that were also co-credited with Mystery of the Emblem.

Wrys is greatly fascinated by observing how the children under his care learn and grow every day.[5] While he is a trained healer, Wrys prefers not to heal the children of the monastery unless he absolutely has to, as he believes that it is important for children to learn about danger and injury.[6] He held an appreciation for witnessing friendships between other people.[7]

Wrys
Establishes a monastery and takes in orphans.

Wrys, Altean Healer
Wrys built a monastery and spent his remaining years caring for children who had lost their parents in the war.

Wrys, Altean Healer
Wrys spent the rest of his days in a monastery in Altea. He often lent a helping hand to prospective knights.

Wrys was featured on one card in the fifth series of the Fire Emblem Trading Card Game.

Wrys makes a minor appearance in Code Name: S.T.E.A.M. in a rare version of the animation of Marth's Lodestar special move. His Shadow Dragon & the Blade of Light portrait occasionally appears in the background instead of the Fire Emblem when Marth casts the healing move.

Wrys is featured on four cards in Fire Emblem Cipher.

Wrys appears as a support spirit. 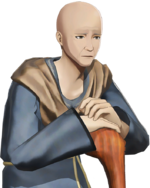 One of the generic villagers from Warriors.