Olivia (Japanese: オリヴィエ Olivie) is a playable character debuting in Fire Emblem Awakening. She is a dancer in the employ of Khan Basilio of Ferox. 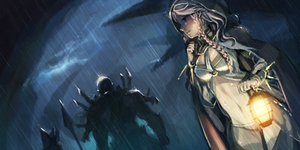 Olivia waiting for Chrom and Basilio's forces to arrive in the Midmire.

Olivia is the only character of the dancer class appearing in Awakening. She joins the Shepherds automatically upon the beginning of Chapter 11. Additionally, Olivia becomes the mother of Inigo if she is married.

Olivia first appears during Chapter 10: Renewal. Basilio had her prepare carriages in the Midmire for Chrom and his forces to use in their escape from Plegia after rescuing Emmeryn. While Chrom is unsuccessful in rescuing Emmeryn, she is still able to help him and his allies escape after the Plegian general Mustafa is defeated.

Olivia fully joins Chrom's forces during Chapter 11; during the battle she aids the Shepherds by dancing to reinvigorate them. Olivia accompanies the Shepherds in their future endeavors after the fall of Gangrel, including the campaign in Valm and the final battle against Grima.

There are three different variations of Olivia available to Heroes, both of which are tied to her storyline appearance in Awakening. The normal variation of Olivia is one of the characters available to be summoned by players from the game's initial launch, and is also the eleventh of twelve characters that are part of the game's Hero Battle rotation; she was first made available via Hero Battle at 7:00 AM UTC on February 12, 2017 through 6:59 AM UTC on Feburary 13, 2017, and her Hero Battle has been available during the same time period every twelve days thereafter. A performing-arts variation of Olivia was made available between the period of September 29, 2017 through October 30, 2017 as part of the summoning event surrounding the launch of the Performing Arts update. A variation of Olivia, here dubbed "Ylissean Travelers" variation after the name of the summoning event she debuted in for lack of a theme common to most other variant characters, was made available on July 20, 2018 surrounding the launch of the Prince of Ice update.

The normal variation of Olivia is one of a select few characters to have been inherently available at all five rarities, although inherent availability at five-star rarity has been limited to summoning focuses.

Olivia: Festival Dancer is only available at 5★ rarity.

Olivia: Sky-High Dancer is only available at 5★ rarity.

Olivia appears as a playable character in Fire Emblem Warriors through the game's Awakening downloadable content pack. She makes no appearances in the game's main story, though she is featured in the Caravan Dancer History Mode map.

Olivia is an extremely shy individual, though she manages to shed her shyness when doing her dance routines.[2] When flustered she frequently exclaims "how embarrassing" and assorted derivatives of the phrase. Despite her skills Olivia often plays down her talents to others out of shyness. Her roster description also mentions that she is a mesmerizing singer.

Her son Inigo shares her shyness, in the future she told him the best way for Inigo to become less shy was to talk to ladies; the Olivia of the present questions what her future self was thinking when she gave that advice.[3]

Olivia, Shrinking Violet (single ending)
Though she never overcame her stage fright, Olivia danced across the land, mending the scars of war. The flush in her cheeks remained a staple of her beauty.

Chrom, Newly Exalted & Olivia, Shrinking Violet
After Grima's defeat, Chrom was officially welcomed as Ylisse's new exalt. Queen Olivia gave him a much-needed shoulder to lean on as she traveled the land, dancing and mending the scars of war.

Robin, High Deliverer & Olivia, Shrinking Violet
Many wrote of Robin's legendary exploits, but accounts of his origins and character varied. Scholars, poets, and bards agreed on one thing alone—he loved his wife, Olivia, above all else.

Frederick, Cold Lieutenant & Olivia, Shrinking Violet
As Ylisse's new knight captain, Frederick took charge of keeping the peace and training new recruits. His wife Olivia's dances were said to keep his resolve strong and open the minds of his charges.

Virion, Archest Archer & Olivia, Shrinking Violet
Virion returned home to Rosanne, where he was labeled a traitor and a coward, or else ignored entirely. Over time, however, Olivia's dancing managed to bring him back into the populace's favor.

Stahl, Viridian Knight & Olivia, Shrinking Violet
Stahl continued his service as an Ylissean knight and led crucial missions across the realm. Olivia spent years trying to get her husband to pay attention, but the two still built a fine life together.

Vaike, Zero to Hero & Olivia, Shrinking Violet
Vaike returned to the streets that raised him and was welcomed as a hero and brother to all. Still, he was no match for his wife, Olivia, whose modest but mesmerizing dances made her more popular by far.

Kellam, Oft Forgotten & Olivia, Shrinking Violet
Though she never overcame her stage fright, Olivia danced across the land, mending the scars of war. Her husband's name has been lost to history.

Lon'qu, Gynophobe & Olivia, Shrinking Violet
Lon'qu returned to Regna Ferox and served as Basilio's right-hand man. When the West-Khan sent Olivia on errands across the globe, Lon'qu accompanied her without fail and ensured her safety.

Ricken, Upcoming Mage & Olivia, Shrinking Violet
While continuing to study magic, Ricken realized how childish some of his actions had been. Thanks to Olivia's dances, however, the years hence were full of joy and laughter.

Gaius, Candy Stealer & Olivia, Shrinking Violet
Gaius never lost his sweet tooth, though he ultimately returned to less savory enterprises. His wife, Olivia, wandered down more than one dark alley just to make sure he was safe and sound.

Gregor, Swell Sword & Olivia, Shrinking Violet
After the war, Gregor briefly sank into a life of excess, but when he saw his wife dancing in the streets at night to make ends meet, he resumed work as a sellsword. ...Olivia was most grateful.

Libra, Fetching Friar & Olivia, Shrinking Violet
Many an unfortunate child found joy in the small orphanage Libra and his wife built after the war. The children especially loved Olivia's vibrant dances, which often filled them with glee.

Henry, Twisted Mind & Olivia, Shrinking Violet
Henry settled down with Olivia and turned out to be a surprisingly good father. Their newborn son inherited both his father's grin and his mother's undying love for entertaining others.

Donnel, Village Hero & Olivia, Shrinking Violet
Donnel returned to his tiny village and built a happy life with his mother and his wife, Olivia. Their forgotten hamlet glowed during festivals, when Olivia's dancing warmed more than any fire.

Olivia is featured on three cards in Fire Emblem Cipher.